The weekend kicked off with all the climbers heading to the crags at Trial Wall near Rhossili Beach. This is one of the Gower’s finest sport crags, with super steep 25m routes straight off the golden sand of Rhossili – unfortunately the tides were in so the climbers made do on the upper grassy banks. There were some great outdoor leads by both Matt and Andy, and also a few big falls throughout the day as people were pushing the grades. 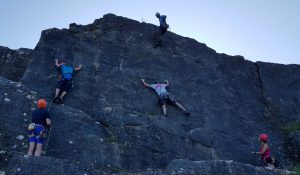 Charmian heroically fell off the top of Spittle and Spoon (6c), a mere centimetre away from clipping the final bolts. But, undaunted, she started it again and completed it. Nick, Elman and David, never fully satisfied with sport climbing, managed to also get some Trad in the later afternoon when the tide had gone out.

Meanwhile the walking group (Phil, Ian and Sarah) took in cliffs, hills and sandy beaches around Rhossili and Worms Head in the southwestern corner of Gower. Everyone met up in the King Arthur pub in nearby Reynoldston in the evening.

On Sunday, the climbers went to Port Eynon on the south coast. 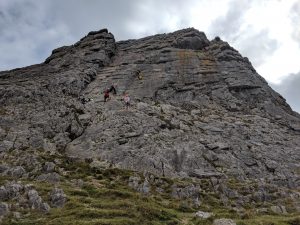 This included trad climbing on Boiler Slab, in a lovely setting. There were good lead climbs by all that attended, notably Matt, Andy, Steff and Richard, all relatively new to Trad but smashing the routes none the less! Meanwhile Philip, Ian and Sarah walked from Worms Head in the west to Port Eynon in the east, enjoying the cliff-top views and the remarkable geological formations on the way. Everyone met up again in the evening with a barbecue in the campsite.

On Monday, the climbers explored routes in Fox Hole, Southgate. It was a bit of a difficult walk-in (made even more difficult by some questionable navigation), but at the eventual end there were excellent sport climbs on limestone in a cave to be found. Elman and Matt managed to get up the very intimidating Goose in Lucy, a 6c+ classic 3* route. An epic day out; even for those watching! 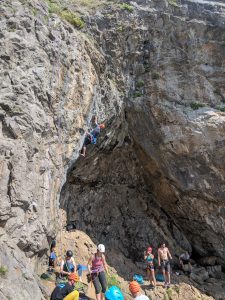 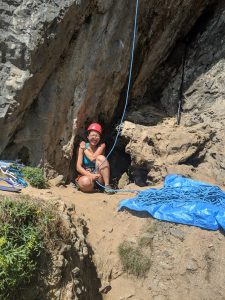 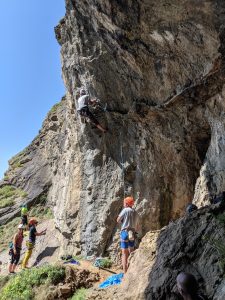 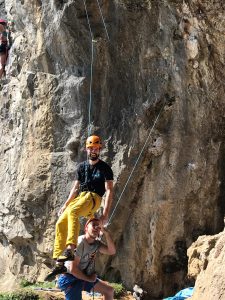 Different levels of energy in the walking group meant that Sarah and Ian contented themselves with a stroll to the beach at Three Cliffs Bay. This left Philip on his own to find the highest hill in Gower to walk up (the Cefn Bryn, 186m), with a round trip to Three Cliffs Bay and back to the campsite.

It was a great Bank Holiday weekend, blessed with plentiful warmth and sunshine, and well done to all the climbers, who pushed themselves hard, but had big rewards for their efforts.