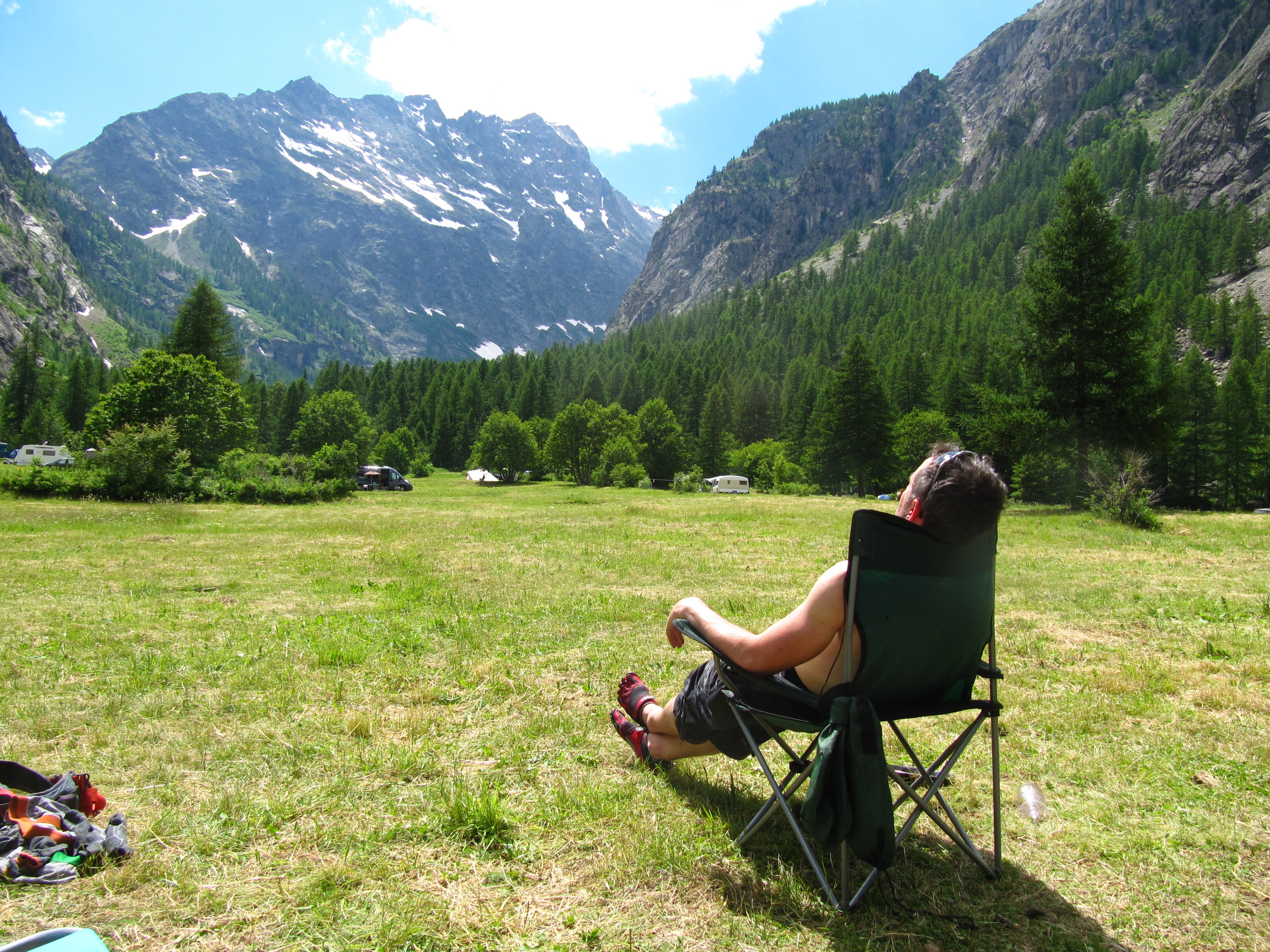 On the summer solstice Rob Johnston, Bea Villata, Tomasz & Seb Zareba, Pete Murphy, Alex Spurling and I converged at Ailefroide campsite (1500m). About 100 miles south of Geneva, it is set in a beautiful alpine valley with streams, pine trees, wild flowers, and birdsong, surrounded on all sides by steep slopes and granite cliffs. These rise through snowfields to jaggedly meet the sky in various peaks and ridges at around 3-4000m. The main activities were sports rock climbing and an epic dawn till dusk ascent and traverse of Pelvoux (PD+, IV, 3943m).

On the first day all of us climbed ‘Palavar les flots’ (14 pitches, 5c), with panoramic views of the valley below. Pete, Alex and I managed six pitches before abseiling off, the others nine. Later in the week, one of the best routes for Bea was ‘Chaud Biz’ (180m, 5c), while Alex and Pete had fun on ‘Poire’ – a steep, exposed 200m 5c, especially the 4th pitch which ‘flowed continuously’. Alex enjoyed the fact that he was able to climb on all seven days, whilst Pete said that he had managed to do more climbing in one go than ever before. Continuing the fruity theme, Seb’s favorite was ‘Peach’, a ‘scary’ 9 pitch (180m) 5c, which he particularly enjoyed as a newcomer to multipitch climbing. His brother Tomasz was pleased with the way in which his confidence had increased since rather tense beginnings at the Ecrins 2011 meet. 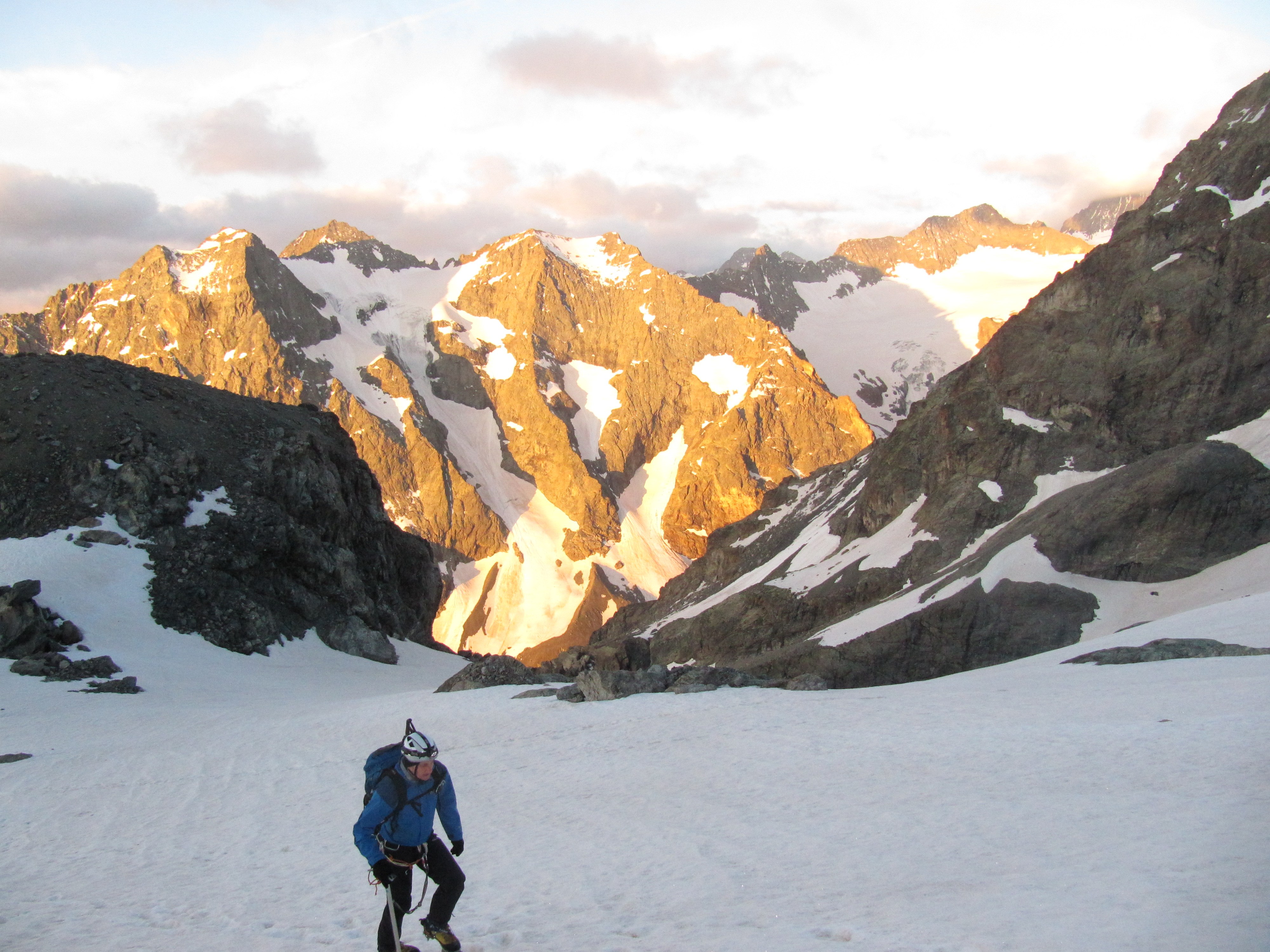 Mid week, as soon as the forecast allowed, all except Pete and Alex walked up to Pelvoux hut (2700m). Neither Tomasz nor Seb had done any mountaineering before, so Bea and I taught them ice axe braking on nearby snow slopes. We also surveyed the first part of the route in anticipation of a pre-dawn start. We had a cheerful evening meal chatting to some Spanish and French climbers, the latter being a Gendarme from Grenoble and his wife. These two planned to reduce the descent time from 5-6 hours to 20 minutes by leaping off the summit glacier on their paraglider. The next morning we left the hut at 4am, walking under the stars to the bottom of the standard southern approach to Pelvoux, ‘Coolidge coulour’. The clouds clinging to the surrounding mountains lit up first pink then yellow as the dawn came. The 45 degree snow slope of the coulouir took us breathlessly from around 3200m up to 3800m. A further short climb up a snow slope got us to the main summit (‘Pointe Puiseux’)and spectacular panoramic views looking down on the surrounding peaks, clouds and valleys. 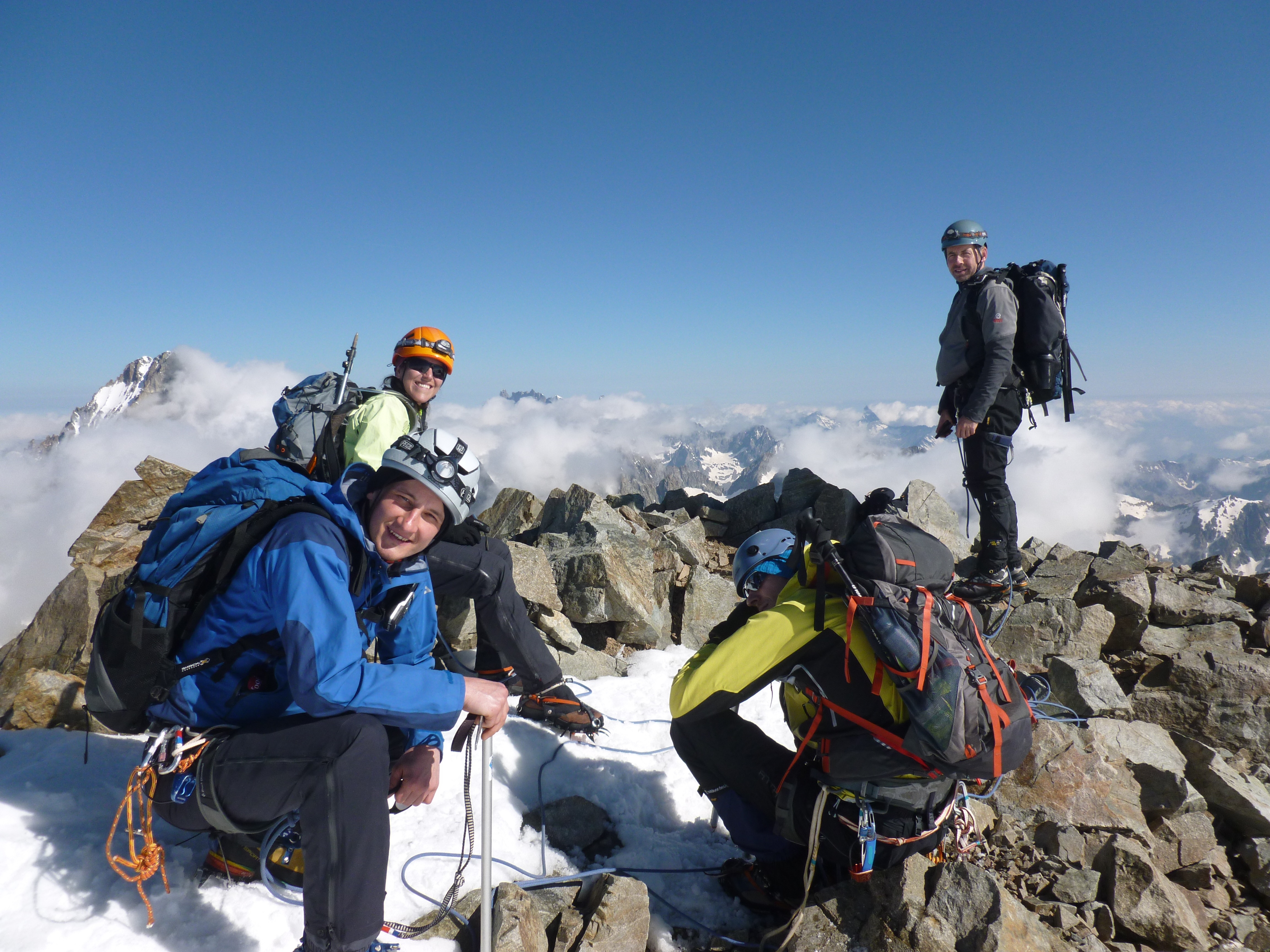 It was now 9:30 am, putting us 60-90 minutes behind the guide book time, which we attributed to a lack of acclimatization. We fairly quickly started to head down, immediately encountering the paragliders, who were now climbing the peak instead as the air conditions had proved unsuitable. After that, to make up time, we bumslid a short snow slope section, little knowing that our ‘unconventional’ sliding techniques were causing considerable amusement to another group who were watching from the twin peak (‘Pointe Durand’). 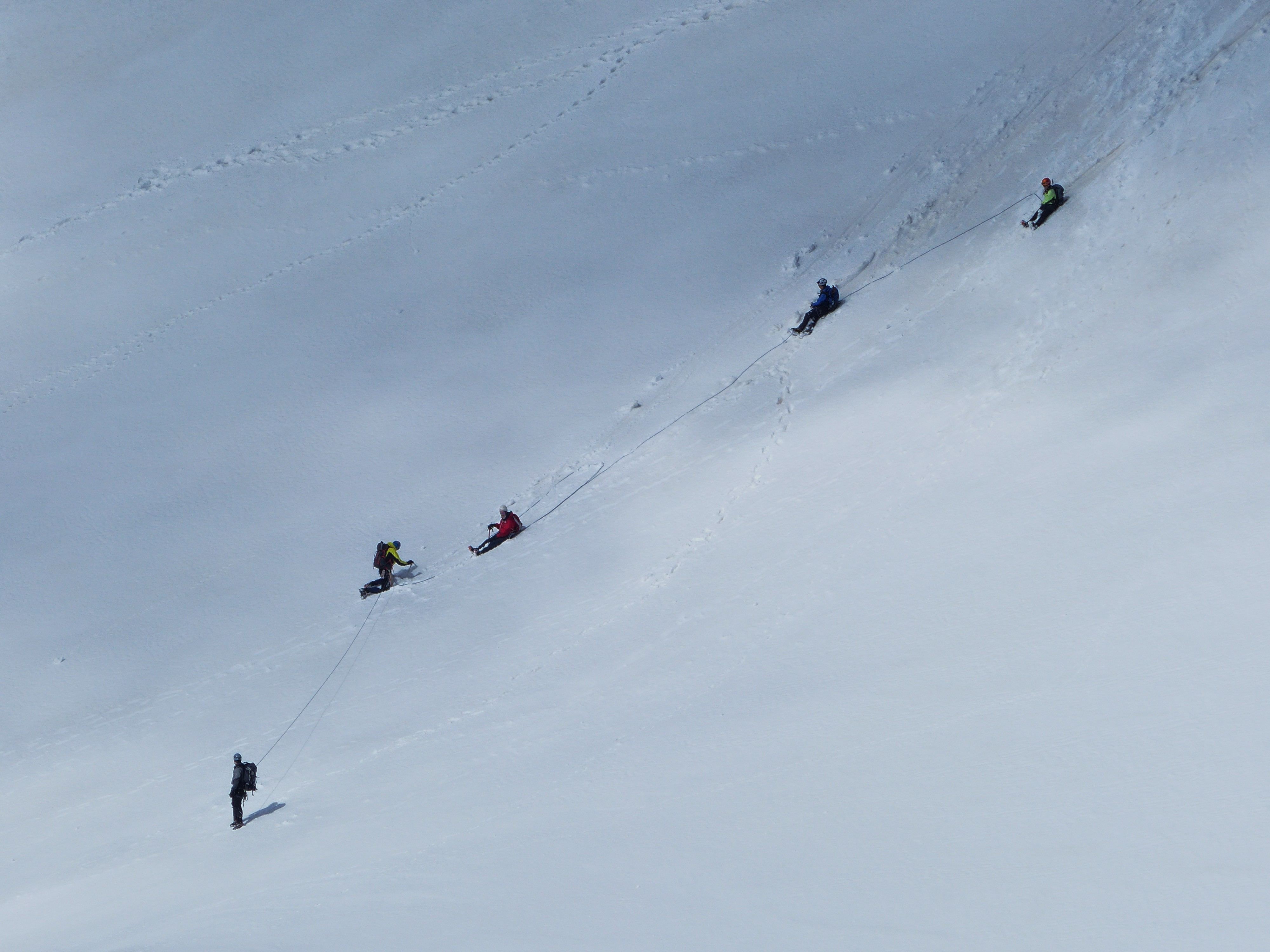 This emerged when we returned the gear to the hire shop the next day. The shop happened to be owned by said party – who were kind enough to send us the photos of les ‘Marylebone Mountaineering Comiques’. The descent down the middle /left of the summit glacier was straightforward until about 3800m. At around this point we faced the twin eerie dangers of walking below some ice cliffs and navigating crevasses. The latter were at least 10 m deep, but only about 50 cm wide where we crossed – so we jumped them fairly easily. Below this further descent down the glacier was made impossible by much bigger crevasses and ice cliffs, so we scrambled over the highly exposed rocky ridge to the left of the glacier, with precipitous drops on each side. Four abseils we needed to get us back down to the edge of the glacier at about 3000m. This being a well recognised route, gear to anchor the ropes was already in place. Even so, the way wasn’t always entirely obvious at first, and I was glad we had taken the time to carefully study this rather complicated descent in advance. In poor visibility navigating could have become very difficult. Now beneath the dangerous section of the glacier, we traversed a fairly easy path from the left to the right hand side of it, afterwards needing two more abseils to bring us over two rocky outcrops beyond that. We thus reached the top of the Pelissier snowfield (2900m). It was easy to walk and slide down this to around 2400m, where we began to look for what proved to be a rather poorly marked but identifiable footpath through the steep grassy slopes. This took us down to 2000m – about 500m above Ailefroide. At this point we took the right fork the guide book described. Although the path started out as a clear one, it degenerated and we rapidly found ourselves lost at the top of huge precipices. Having being delayed by the abseils – which take a long time for five people- we were now becoming tired and dusk would soon be approaching. Rob mentioned that most accidents on mountains happen not on the ascent, when people are fresh, but during the descent. We decided to take the safer option by climbing back to the fork and following the alternative, less precipitous and seemingly better marked, although less direct trail. We soon found ourselves struggling to find this too, and I went ahead to route-find. Thankfully, apart from this one difficult section, it was well marked until the mountain played its final wild card in the form of an unexpected steep snow slope, forming the final 300m or so of descent into the valley. The snow was relatively benign, so I quickly headed down so that at least one person would be off the mountain before dark and able to raise some back-up. The moment I reached the road the guardian of the nearby hut whizzed by in his buggy. I flagged him down, explaining that I was concerned about my friends still on the mountain, and managed to persuade him to give me a lift to Ailefroide (about two miles). Afterwards Pete, Alex and I drove back up the valley. By now it was dark, and we were initially glad to see head torches coming down the snow slope. However, there were just two, and they were weaving down at alarming speed, albeit in seemingly controlled wide zig-zags. Alex and I quickly walked the 20 mins from the road to the bottom of the snow slope, where we were relieved to discover that all our group had just made it safely to the bottom. They were by now accompanied by the owners of the mystery lights, who proved to be British ski-mountaineers a few minutes behind them. They had climbed Pelvoux north face that morning, intending to ski down quickly afterwards. However, the snow wasn’t as extensive they had planned for, and just like us they had got lost on the footpath. All ended well as they kindly offered to use their car to help ferry the five of us back to Ailefroide, where we all finally arrived somewhat exhausted around 11pm. This was, er, a bit later than the 1 pm anticipated from the guidebook time of 9 hours for the whole route. 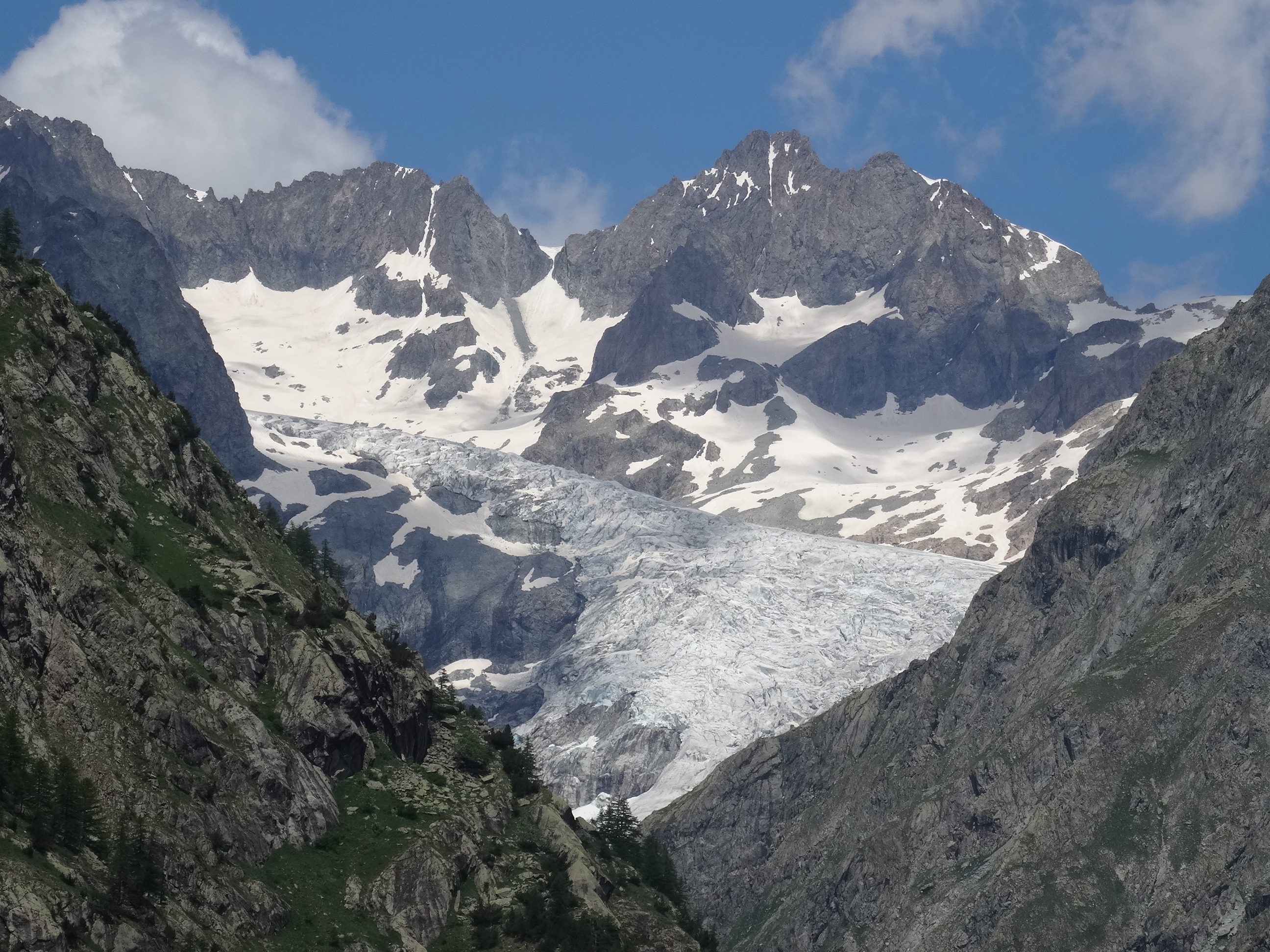 The next day Rob called a debrief, at which it emerged that just the sort of hazard that he had referred to had emerged when the four of them had reached to top of the final snow slope: Bea dropped her rucksack which sped down at alarming speed, ending up a hundred metres or more below, falling in the crevice between the rock and the snow. At this point the tiredness seemingly began to show, resulting in a lack of cohesion as regards how best to navigate four people, of which two were inexperienced, with only three ice axes and three pairs of crampons, down the snow slope. In the end Bea went first – with neither ice axe nor crampons, kicking steps and secured by Rob and the others, all fully equipped, roped up behind her and ready to brake. Thankfully she didn’t slip and her bag was retrieved uneventfully. We didn’t settle the question from a technical point of view. However, I was very glad that the issue was discussed and not glossed over, so that we will all be wiser for the future. On this occasion things didn’t get out of hand, but it highlighted to me just how easily the unity of a group could be lost, and how minor disasters have considerable potential to be compounded by poor decisions made by tired people. Had we anticipated just how far we would fall behind schedule, thereby increasing this risk factor, it would have been safer to opt for the less ambitious alternative of descending by reversing our ascent route. However, such benefits-of-hindsight hopefully won’t detract from what was in the end an amazingly varied, scenic and memorable alpine adventure. 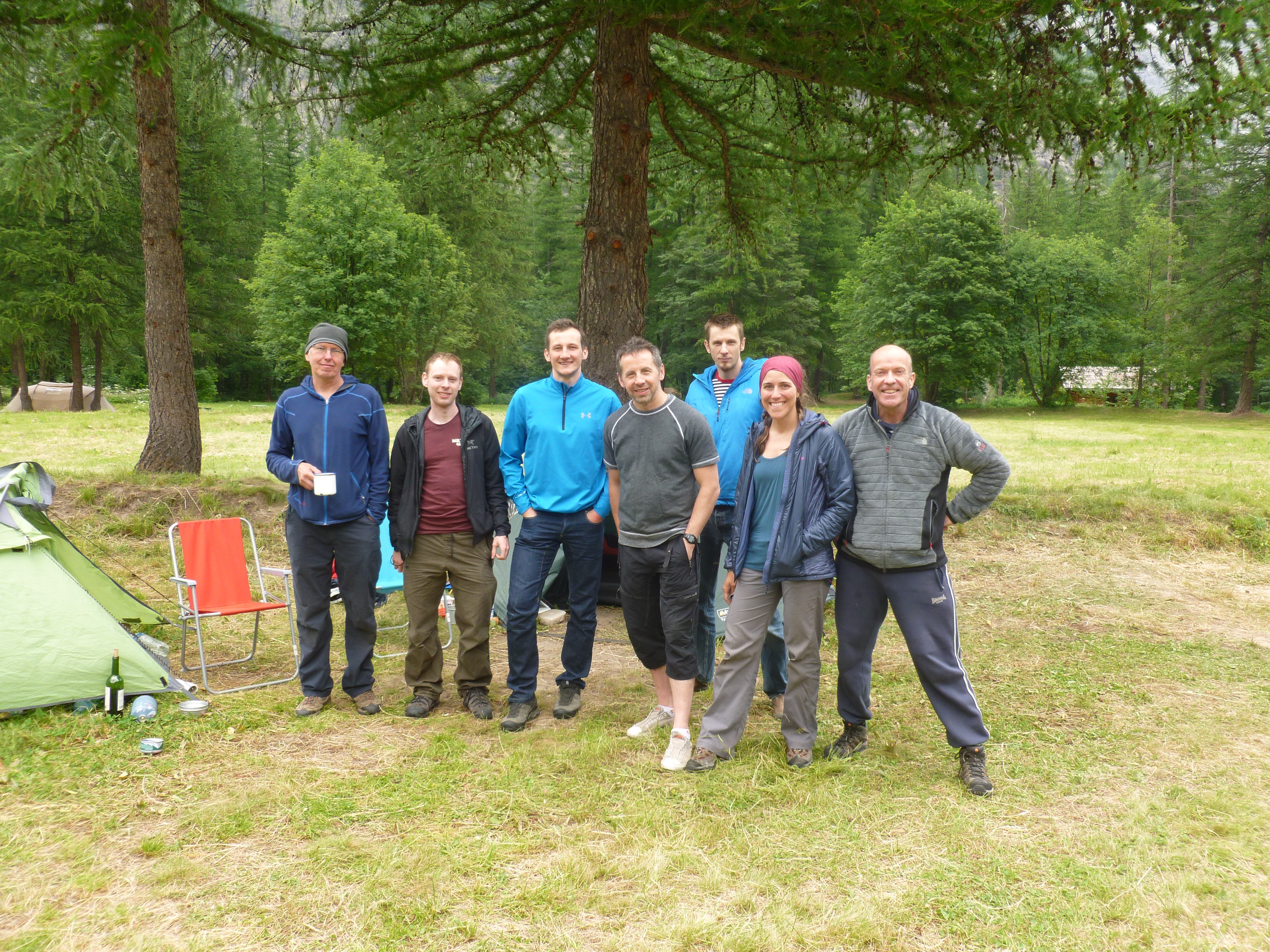 A highlight for Rob was the Friday evening barbecue, the remaining spuds baking beautifully in the hot coals. In a stroke of genius, Rob solved the problem of defrosting some frozen burgers – which were sealed in plastic- and cooling the beers by throwing them both in a bucket of water.