The 2014 dinner meet was held at The Heights bunkhouse in North Wales. Report by Sarah Waldram.

David, Andy, Jamie, Lisa, Robin, Mana, Beatriz and Kathy parked the car in Nant Peris and walked up to the Devil’s Kitchen, summited Y Gant and descended by another path slightly west from the original ascent and following the river bed, where Robin decided to plunge in. Unfortunately, Mana didn’t feel well and had to return. They got soaked and blown on, and even managed to get a bit of hail, but the surroundings were very beautiful, and, with hardly encountering anyone else, it felt really isolated and powerful.
Sarah G, Cath, Margaret, Jules, Lena, Lisa, Caroline and Sarah W went to Anglesey, the Island of the Blessed, walked on very beautiful, windy and wet beach, encountered the story of the piety of St Dwynwen, and ate butterfly cakes
Iago and Juan went scrambling at Tryfan, after heartbreakingly deciding the weather wasn’t allowing them to climb.
Simon M-C and Chuck went off to Betwys-y-Coed to ride the Marin trail on their mountain bikes. Even before leaving the carpark there was some fun and games with brand new clip in pedals and shoes with Simon clinging to a fence and Chuck trying to wrench Simon’s shoes from the pedals. With mechanical issues behind them they enjoyed the grinding uphills and the technical downhills of the trail. Much air between tyres and trail was found and mostly rider and bike remained the right way up!
Nick and Gosia stayed in to do risk analysis (yawn …) 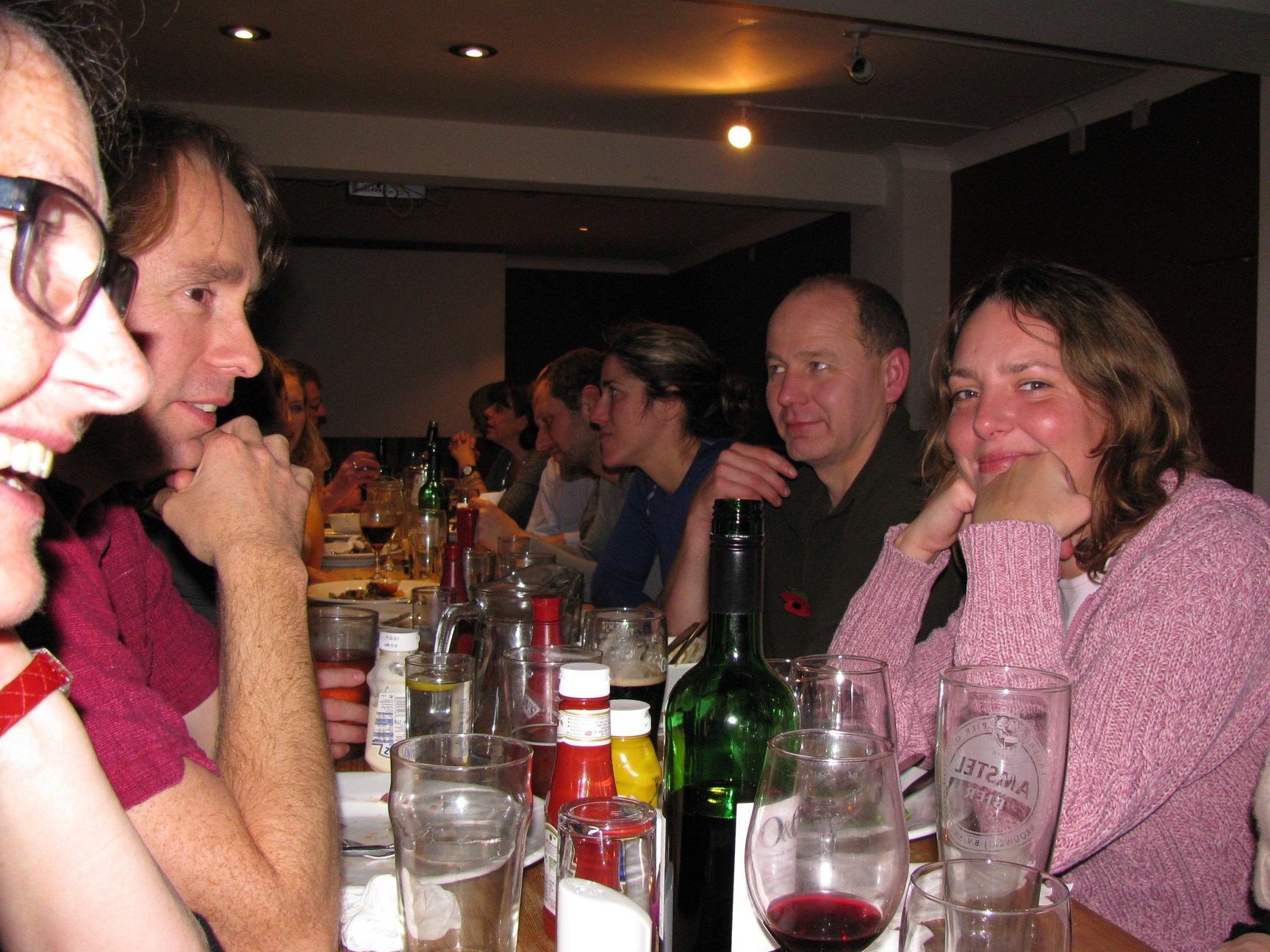 David, Simon A, Kathy, Beatriz, Caroline, Simon M-C and Cath climbed Tryfan, which was made more interesting by intermittent rain! The scrambling was good and views were too. David, Beatriz and Kathy, having a bit more time on their side, decided finish the day with Bristly Ridge which is also an excellent scramble.
Sarah G, Lisa, Nick and Jules walked up Moel Eillio. They were hoping to do a full circuit but ran out of time as they didn’t leave the bunkhouse (The Heights) until just before 11.00 am and were then distracted by observing the two minutes silence at the Remembrance Day ceremony at the Llanberis War Memorial.
Margaret, Lena and Sarah W started at Pen-y-pas and walked part of the way up Snowdon
Robin ran up Snowdon
Juan and Iago went climbing at Tremadog, but it was too wet/bad weather/raining. They finally headed back to Llanberis and had some nice climbing in the quarries.
Others unaccounted for … 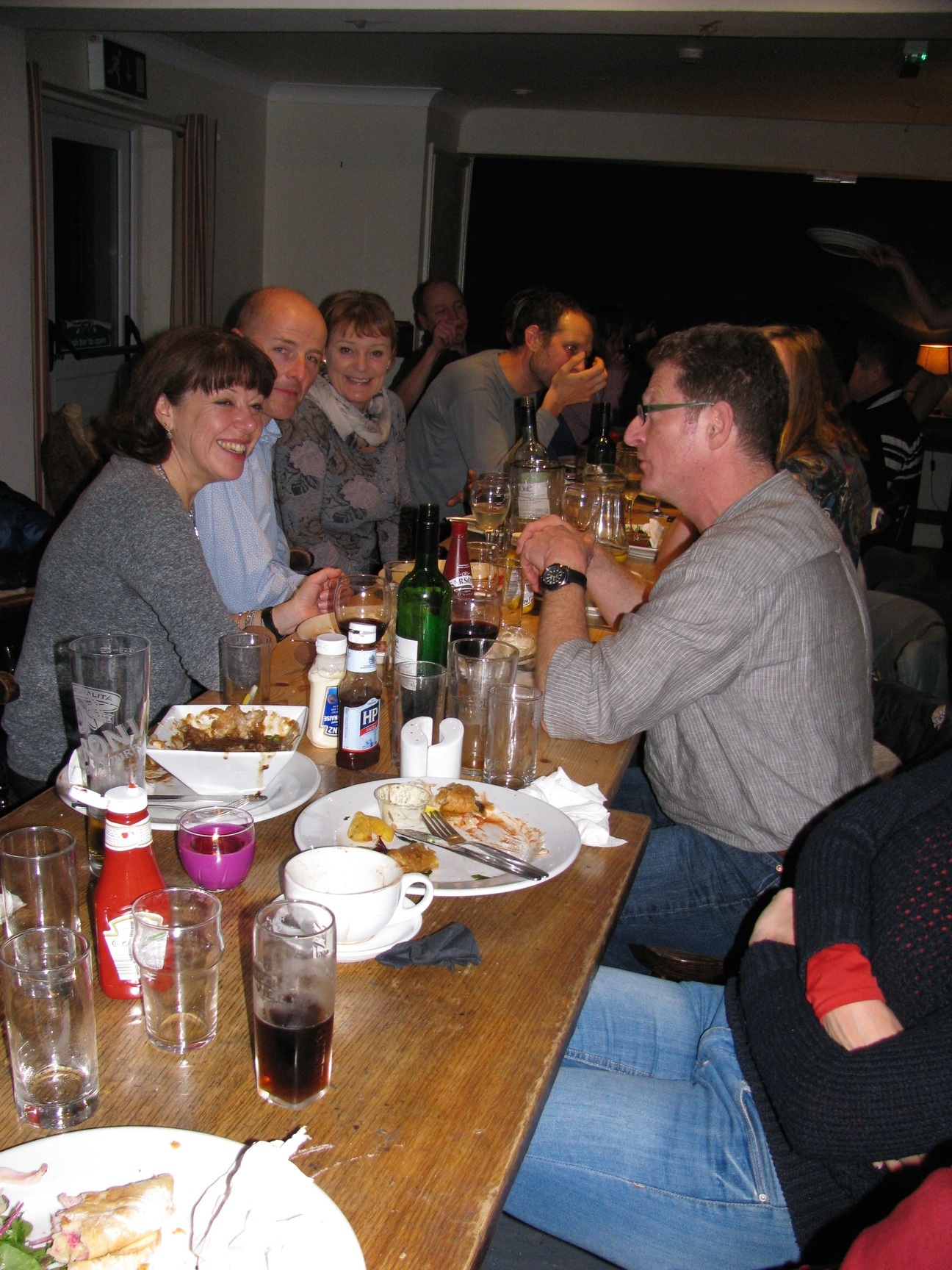 Nick excelled himself in the Cliffhanger (aka F***wit) awards speech. He produced a mathematical proof of F***wittery based on an equation including variables for action with potential for disaster, real opportunity for disaster and disaster being generally know and talked about. There was also an inverse involved when the instance of stupidity actually fortuitously, and contrary to all reasonable expectation, led to a good outcome. Nominations for 2014 included Beatriz and team in the Ecrins taking longer on descent that intended, Juan and Rebeca’s van breaking down on Dartmoor, and Robin’s voluntary immersion in a freezing cold stream over the dinner meet himself. Again following rigorous scientific method (Margaret giving entirely objective view of the applause for each nomination), Robin was hailed as hands-down 2014 winner. The award itself, replete with Wendy’s bra and other mementoes of adventures past, will be presented on a separate occasion.

Footnote: Next to The Heights we found a lovely and really quirky tea shop. The gentleman serving us explained that they kept the place secret because they didn’t like to work too much and just a few customers was perfect for them. As good Londoners, we thought we should spread the word to the entire club.

More photos in the gallery.