We enjoyed three days of wall to wall sunshine on the August Bank Holiday weekend!

On Saturday Harry led a big walk on the hills and moorlands around Widecombe-in-the-Moor.  Harry was joined by Ian, Sarah, William, Paolo and Jasmin.  There was much to admire: magnificent moorlands, great views from the summits of Tors, prehistoric stone circles and remains of ancient settlements.  Wild ponies tried to make friends with us as well. Finally, everyone tucked into an over-indulgent cream tea. 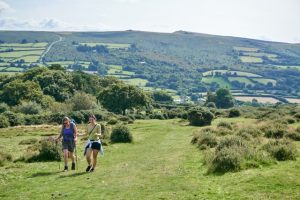 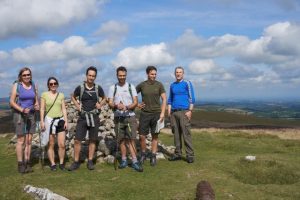 Simon, Michael, Chuck, Nick, Nick R and Anna went climbing on the Dewerstone, where a great set of granite rock crags, in a lovely woodland dell, made for an excellent climbing location for everyone’s level of ability.  Many of the climbs are multi-pitch, sustained, and required good techniques with cracks and grooves.  Locals recommended ‘Central Groove’ as a good one for us to try out, at HS/4b. 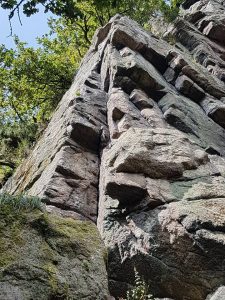 On Sunday Ian, Sarah, Jasmin and Philip set off for a wild swimming expedition to the upper River Dart.  A few miles up from the nearest road (from a rather crowded car park), in the midst of the deeply-cut and wooded valley, they found a pool in between a series of rapids.  Philip found the water a bit too cold, unlike Ian who habitually swims in Hampstead Heath in winter, but the sunshine soon warmed everybody up, and it was a great place for a picnic. 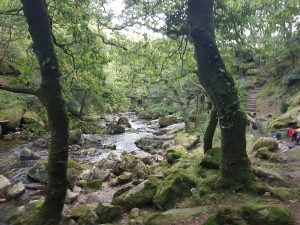 Paolo, Harry, William went back to Dewerstone. They had a go on ‘Central Groove’, and tried out some of the dozens of other possible routes.  Paolo got pumped-out on a VS lead; Anna had a big run out.  ‘Douggie’ the dog tried to go climbing with Harry. Nick, Simon, Gosia and Anna, who were also in Dewerstone, climbed Harris Crag (rather over-vegetated), ‘the Camel’ (very mossy) HS 4a, and ‘Leviathan’ VS 4c. 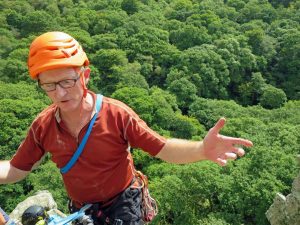 Rick and Angela explored coastal cliffs at Berryhead, and thoroughly enjoyed ‘Moonraker’, HVS 5a, in a stunning position looking out to sea, with steep climbing and big holds.

It was shame to leave on Monday, as this was the sunniest day of all.  But there was still time for some more climbs.  Sarah and Ian had a day on the seaside.  Philip visited the local monastery at Buckfastleigh, where the monks are renowned for their ‘Old Bucky’ tonic wine.

We liked the campsite (despite having to queue for the bathroom in the morning), in a peaceful and pretty location with the gently-running river at the bottom of the field – worth returning to. 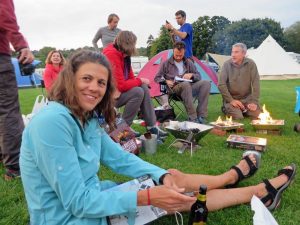