Morocco offers the full range of sport and trad climbing to suit all abilities.  Highly recommended destination for those looking to get away for a short break. Large choice of single pitch roadside crags to long multi pitch adventure days.

Chris, Joe, Michael and Nick formed the advance party and met in the salubrious surroundings of the Gatwick-central Travelodge bar to discuss all important strategic questions about the climbing objectives for the coming days: “…are you worried about the scorpions? … did you remember to bring the ropes? …am I within the baggage weight limit?” (best not to ask Joe about that last one).  Many hours later, having enjoyed an uneventful flight to Agadir and endured a more eventful (and trying) experience of hiring a car, we were en route to Tafroute through the stunning desert scenery.  We arrived and checked into Les Amandiers hotel, our base for the week.

Exhausted from the journey we thought a spot of light bouldering was in order and headed to the nearby Third Tor Boulder circuit.  This was on the local, coarsely-grained, granite that we found to be much less inviting than the quartzite we climbed for the rest of the week.  On our return to the hotel we met Steve Broadbent (the expert’s expert on climbing in Tafroute) and had a few beers with the Oxford Alpine Club (OAC).

The next day was clear and hot.  Driving in convoy to the nearby Maid Marion Rocks, Chris and Joe took on some short steep routes such as Popty Ping’d Wibbly Wobbly (VS*) while Michael and Nick sought out the easier but longer line of Imhotep (S) – a three star classic.  Eschewing textual guidance and relying on his natural instincts for the right line, Nick began the route on the (wrong) left-hand crack before traversing rightwards.  He then spent all of six feet climbing the correct line before leaving the route to link up with another climb which had a fun chimney section followed by a, somewhat more difficult, slabby line to the top.  The rock was superb and easily protectable throughout.

Observing Nick’s lamentable route finding Chris and Joe then had a go on Imhotep.  However, having started correctly, Chris missed a key rightwards swing out of the initial crack and so lead a similar line to that taken by Michael and Nick (placing an immovable nut in the process – the first item of lost gear).  Meanwhile Michael led the very imaginatively (particularly on this occasion) named Berber Man Watches Kissy Wissy (D**).  Chris and Joe then returned to the steep stuff while Nick re-attacked Imhotep, successfully finding the nice airy move right from the initial crack and enjoying excellent climbing above but moving right again too early to complete the full line.  In order to avoid leaving a bag at the foot of the crag Michael then rigged up a form of hoist before beginning to second.  However, the differential weighting this created caused Nick no little confusion when belaying leading to rather more slack on one rope than Michael was happy with.  (It may have been panto season but never has “Pull the other one” been screamed with quite so much emotion).  To complete this stressful end to the climb Nick decided to drop a carabiner and sling in an inch-wide crack that led deep into the crag.

Saturday was uncharacteristically overcast and with temperatures perhaps as low as 15C, we almost considered wearing jumpers.  Bravely ignoring the chill we headed to a slightly more distant venue for which the guidebook listed over 100 routes.  We began with a steep walk up scree to the Olympia crag.  This featured a number of short routes with classically inspired names.  Chris and Joe first took on Odysseus (MS*).  Nick, ignoring the temptation of Persephone’s Bush (HS), jumped straight on Aphrodite’s Crack (S) which, although initially pleasing, had a loose section near the climax and proved ultimately unsatisfying.

Both teams then dropped back down hill to Centenary Buttress where the eponymous route offered a two-pitch, three star HS mini-adventure.  It was indeed a great climb with straightforward moves up a finger-width crack on the first pitch followed by bolder climbing up a shallow groove in the slab above.  This led to the fantastic Centenary Balcony – an incredible flat deck halfway up the cliffs that was now golden orange from the setting sun.

Later that evening we met up with Jasmin and Paolo, fresh from their drive down from Marrakech (well, perhaps not feeling that fresh after around 6 hours on mountain roads).

The fourth day yielded perfect conditions, sunnier than the day before but not roasting hot.  Chris and Joe resumed their exploration of Robin Hood rocks with an ascent of the deservedly two star Sheriff’s Wall (S) followed by the Sword of Damocles (HS) both on the conveniently located Roadside Buttress.  Paolo and Nick followed suit and the off-width crack at the start of Sword of Damocles gave Paolo a nice opportunity to deploy the biggest cam on his rack (despite guidebook advice about bringing big gear the routes we had climbed hitherto had been easily protectable with nuts and hexes – however on the harder stuff it was great to have the option of other placements).

Chris and Joe then headed off to Akaltine Edge where, on Six Inch Nails (HS *), a route described as requiring ‘athletic moves’, Chris employed some more unique techniques; initially mounting the bulging overhang, followed by slowly (and presumably painfully) humping his was up, much to Joe’s amusement. Longer arms thankfully meant a repeat performance was not required by the second. Further climbs included The Scoop (VS ***) with a brilliant zig zag climb followed by a daunting blank slab.

In the meantime Jasmin, Paolo and Nick strode energetically up the scree slope back to Centenary Buttress.  Nick led the superb Varsity Games (HS***), his continued lack of route finding resulting in a swiftly curtailed exploration of Jungle Life (VS), before Paolo (“Bold? Bold’s my middle name”) Scianna took over to fair run up the second pitch of Centenary Buttress.  Buoyed by this success Paolo then took on Oxford Crack (VS***) which began with tricky moves up an off-width crack on the right and featureless slab on the left.  With the additional spice that a fall would have (at best) left him extracting cactus spines for the rest of the week Paolo exhibited a textbook example of “sewing-machine leg” whilst trying to place a first piece of gear.

With fading light Jasmin, Paolo and Nick then hunted down some prehistoric rock carvings in a nearby Berber village.  These were located with the aid of a local Berber whose great hospitality (including showing us his many goats) meant we almost missed the NYE entertainment.

We did however make it back for a grand celebration dinner with the OAC followed by a display of local folk drumming and dance performances (though this was mainly by Paolo).

Day 5 – The morning after the night before

For most this was a rest day…  Though when feeling ready to leave the hotel Chris and Joe went for some retail therapy (“You’d like to buy a carpet? well step right this way sir”) and Jasmin, Paolo and Michael set off to a local beauty spot: Ait Mansour gorge.  Nick made it third time lucky on Imhotep by seconding for Paul – a knowledgeable climber from the OAC.

Joe and Chris woke before dawn to head out on the (very) long and (very) winding road to Samazar and the spectacular Dragon Ridge (S ***).  Taking 2 hours to drive and with 170 metres of climbing ahead of them, Joe and Chris prepared for the worse and packed for a benightment.  To their surprise (and joy), they reached the top by 1500 and were able to make the long descent, including a knife edge scramble, back to the car whilst still light.  The climb and the location truly deserve the 3* rating and should not be missed on a trip to the area.  The neighbouring HS line is recommended over Dragon Ridge for those looking for a more challenging day.

Meanwhile Jasmin, Paolo and Nick took a hike around the precariously placed Anergui village (nice drive for fans of single track mountain passes…) followed by some climbs at the Cheshire Cheese crag.  Highlight of these was Paolo’s lead of A Break from the Afternoon Sun (HS*) which, at 55m, was just about doable in one pitch with our 60m ropes.

Paolo and Nick then attempted some sport routes on the granite just south of Tafroute.  For aficionados these offer much promise e.g. The Black Wall (6b ***) but for us it was a cycle of over-ambition, difficulty, fear, and lost gear before the sun set (leaving us with a challenging walk out in the dark over gigantic boulders). 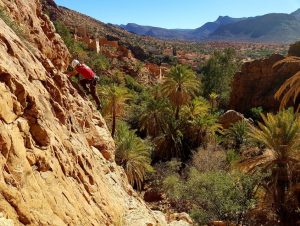 With Anna and Adriano now joining, we set out for the nearest crag: Palm Tree Gorge.  Undeterred by previous geographic mishaps Nick gamely took on navigation duties and after an “interesting” 40 min hike (the guidebook suggested 15mins…) we arrived at the picturesque crag.  Michael was first up leading Rum Keg (VD*).  Chris then took on Tumbleweed (HS*) with Anna, strong from a week of sport climbing in Todra gorge, on belay duties. Adriano, meanwhile, interspersed snoozing under the tress with free soloing sections of the HS climbs (in his trainers).  Next Anna led the steep Farouk’s Fundaments (VS*), bringing up Chris and Joe, while Michael and Nick set off on the excellent natural line of Jarrad (MVS**).  In spite of the difficulty locating this crag the palms did provide a cracking backdrop to the photos and also offered shade from the midday sun.

As we had most evenings we dined at the Kasbah restaurant (good value/quality mix) that night and said farewells to our OAC compatriots.

Joe “Colin Mcrae” Bragg, Chris, Michael and Nick headed back early on Thrusday and proved that while 2 hours 30 is a pessimistic assessment of the time it takes to get from Tafroute to Agadir airport, it’s a fairly optimistic estimate of how long check-in/customs/security will take when trying to leave Morocco.  Anna, Adriano, Jasmin and Paolo decided to take in some R+R by the sea in Essaouira before leaving at the weekend.

Looking back on the week, with its single pitch roadside crags and long multi pitch adventure days, Morocco offers the full range of sport and trad climbing to suit all abilities.  It is highly recommended as a future destination for the MMC and those looking to get away for a short break.

The look on Chris’s face when Joe lost yet another piece of his rack: priceless.