A small, select band collected for this most pastoral of meets – Maija Kilmane, Sarah Glover, Katherine Taylor, Lee Mellows, Caroline Lonsdale and Margaret Ingham. Margeret and Lee arrived first, on Friday afternoon, which meant they could explore the Goth-haunted graveyards and backstreets of Whitby . 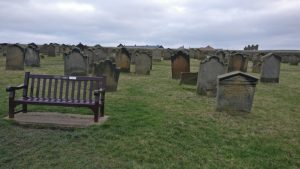 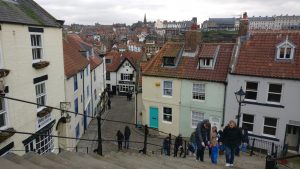 It also gave them the chance to partake in an unusual evening’s entertainment, the Robin Hood Bay Folk Club, which proceeded something like this… In a small room above the Dolphin Inn a group of people sit around eating, drinking a chatting when a guy with a Sailor’s Beard gets up and says something like – “ OK, Fred, have you got something for us?” At which point Fred gets out his banjo and says “Well Mr. Chairman, I’ve found this little number from the ‘60s about Theakstons Old Peculier” and off we go, with everyone joining in on the chorus. Then someone else has a go, and so on, with husband & wife harmony vocals, accordions, a Gaelic harp etc. It was a bit like a Gorillaz concert, but not very much. 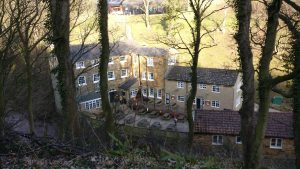 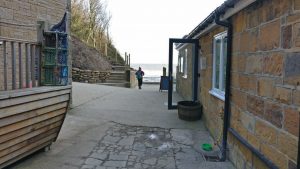 The Boggy Hole YHA was a delightful establishment, nestled in a precipitous valley, with its own beach and a bizarre collection of nautical nick-nacs and literary paraphernalia scattered throughout it as though a large magpie had fancied a go at interior design. An excellent cooked breakfast and packed lunches were also provided for those too lazy to provide for themselves. The only drawbacks were a distinct shortage of showers and toilets (though, to be fair, this didn’t interrupt proceedings by much) and the simultaneous presence of two very large and very thirsty Birthday Parties made up of young families who regarded 4am as a perfectly normal bedtime and Loud as a perfectly normal speaking volume. Earplugs were definitely recommended. 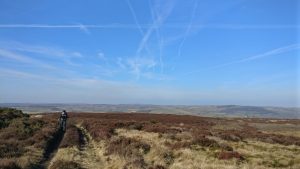 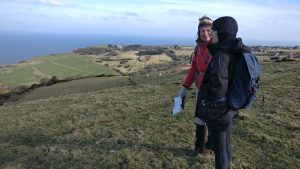 Saturday dawned bright and clear with a stiff, cold breeze and remained that way all day. The entire party set off inland for a walk over the moors and round in a loop to the coast, south of the hostel, and back via the cliff path. Not a lot to report other than spectacular views, lovely weather, tiny horses and a great time being had by all. 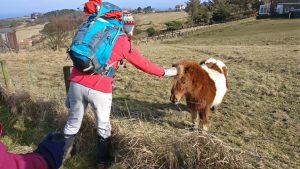 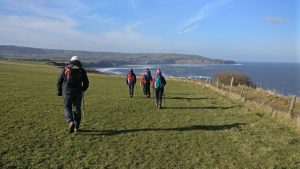 Dinner was had in the hostel, clustered round the crackling log fire, trying to get drunk/exhausted enough to sleep through the jolly carousings of our fellow guests.

A combination of oversleeping , the desire to not leave too late for the long trip back and the desire for some fish-and-chips in Whitby led to a shorter route being planned – to Robin Hood’s Bay  (and a bit further) and back again. The day was cloudier than Saturday, but not by much, so a lovely time was had once again. Robin Hood’s Bay is a delightful little village, with an eccentric cafe by the famous slipway which specialised in 60s/70s rock music, accompanied loudly by the guy doing the washing up. For anyone else wishing to join in, the lyrics were painted on the ceiling. Lovely soup. 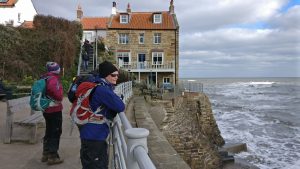 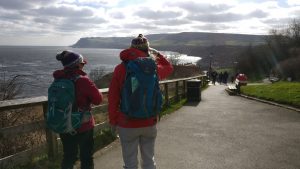 Another of the village’s delights is a sea wall which sports a surprisingly tasteful collection of mosaics depicting local scenes. Here’s the one of the hostel. 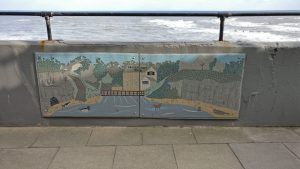 The walk back to the hostel was along the beach. Had it been Saturday this would not have been a problem. However the tides had advanced on Sunday just enough that the water hadn’t quite  cleared the headland before the hostel. Sarah bravely volunteered to go ahead to see if it could be accomplished. It couldn’t. 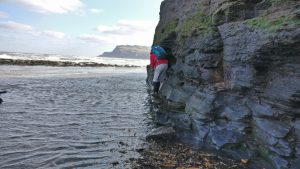 Then came time for Fish and Chips! Margaret and Caroline cried off, wanting to start the drive early. Caroline’s passenger, Maija, had brought an extra train ticket, so she could travel back from Whitby by train with Lee. The meal, in the renowned Magpie Cafe, was excellent and by 3.30 it was time for Sarah and Katherine to be off.  Or it would have been if Sarah hadn’t discovered that she’d lost her car keys. After much going through bags and pockets, she and Katherine headed back to the car (Parked up by the Abbey on a hill on the other side of the river…) to see if the keys were there, while Lee and Maija tucked into dessert (their train wasn’t leaving till 6.30). When they’d finished, they rang the others to see if the key had been found. It hadn’t, and the breakdown company had offered to tow Sarah…up to 10 miles.

Katherine decided that, as she simply had to be in work the next day, she would also try to get back by train, so everyone reconvened at the station. There was no ticket office so she bought one online (at obscenely inflated prices) at which point, of course, Sarah discovered that her new jacket had a hole in one of the pockets and the car key was inside the lining.

By now it was 6pm and Sarah decide it was too late to drive back and she went off the find a B&B. Now, some explanation is required at this point of the train schedule for the trip back to London. The first train went from Whitby to Middlesbrough, where there was a 4 minute gap before the train to Darlington, where yet another train, the Intercity, went on to London. So it was a bit of a problem when the first train was delayed by 6 minutes. And more of a problem when it was delayed by 50mins, essentially marooning everyone on the platform who was not going just to Middlesborough. After some consternation, Maija asked a local how long it would take to drive to York (a stop on the Intercity). ‘Around an hour and a quarter’ was the reply. The intercity didn’t arrive in York for nearly 3 hours…

“But” said Lee, “a cab to York would cost a fortune.” “But” said Maija, “we have a driver.” At which point, Lee phoned Sarah. “Hi, how would you like to spend an evening in York rather than  Whitby…?”

Which is how Sarah ended up spending the evening with meet organiser Caroline Watson in York, while the rest of us got back to London. And think on this… if Sarah hadn’t thought she’d lost her car keys, some of us would still be in Whitby.