Sitting by the absurdly unrealistic electric “flames” of the Fylde Hut fire, misty-eyed members of the MMC tell a legend of the creature named Sebastian.  It is said that he could crack walnuts between his elbows, and open beer bottles under his pecs.  However, the greatest of his Herculean labours was the “Fylde Hut Challenge”.  Awe-struck social secretaries tell of the night a shirtless Sebastian climbed (lengthwise!) from the top of the dinner table all the way under and back up the other side.  To some Sebastian is a hero; others revere him as a god.

Having arrived at the Fylde Hut near Little Langdale at various times on Thursday night, three groups formed for the first day of activities: the climbers drove to Raven Crag, parking next to the Old Dungeon Ghyll Hotel (ODG); one group of walkers (E/I/Ja/Ju/Ph/Sa) set out for Wetherlam while another group (AH/DD/H/Si) took on harsh conditions up Bowfell.

Highlights of the Wetherlam walk were the beautiful snow-capped mountain scenery and unexpected cake stall set up outside a cottage en route.  The full loop took an epic eight hours which, in spite of said cake, meant a great appetite was built up for the evening meal at the Three Shires pub in Little Langdale. 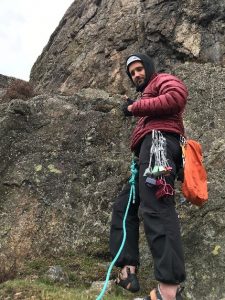 Raven Crag has a firm place in the history of UK climbing and consequently its routes have more stars than the Milky Way.  Unoriginally, N and Pa started with The Original Route (S) and (after a nervy descent down a wet gully) then had a Revelation (HS).  AK, DA and K did some of Oak Tree Wall (S) but probably finished on Holly Tree Direct (HVS).  They followed this with Elevation (S) and K completed her first abseil.  C, Jo and M began on Holly Tree Traverse (VD) before deciding that bouldering was preferable in the early evening sunshine. 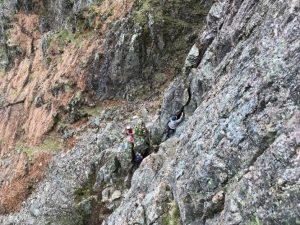 Rain fell steadily on Saturday morning lending itself to a leisurely start and a trip to the copious climbing shops in Ambleside. C and J were shopping for some serious high-altitude mountain gear which proved to be an irrationally compelling spectacle (imagine London fashion week if it was curated by Andy Kirkpatrick). Meanwhile Si led a party of intrepid walkers out in blizzard conditions. In the afternoon AK, H, K and Pa battled up Pike of Bliscoe while DA and N ticked off three fun but frigid routes on Long Scar.

As all the best plans are, the decision to schlep up Scafell Pike via the long route was made in the pub late the previous night. DD led the team off bright (yes, the sun was shining!) and early from ODG and a mere three hours later AK/C/H/Jo/N/Pa were on an icy snow patch within sight of the summit. Those without crampons* found this section somewhat precarious and carefully completed the final ascent. This informed our decision to abandon DD (who went on to do a solo ice climb on Lord’s Rake) and take the same route back down to ODG. After the light hors d’oeuvres of the highest mountain in England, C and N thought a climb was in order so they completed Middlefell Buttress (D). 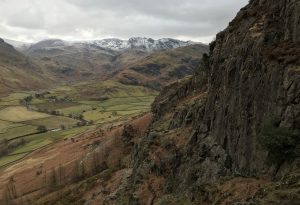 Meanwhile AH/E/I/Ja/Ju/K/Ph/Sa/Si ascended Crinkle Crags. They had sunshine all the way up and it only began to rain when they were in sight of the ODG pub at the end. A swift pace was maintained save for a little oohing and aahing at new born calves at the bottom of the walk. 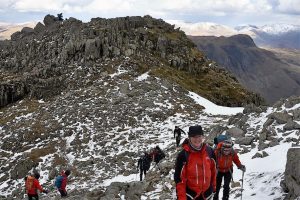 Finally, DA and M were up at White Ghyll (another crag with more pedigree than Crufts) where they completed the four pitches of The Slabs Route 1 (S). This was M’s first ever multipitch!

*In fact this was everyone, since those with crampons hadn’t bothered to put them on. C had his crampons in a box strapped to his back which we thought would have amused mountain rescue if he’d slipped and ended up taking the express route back down the mountain.

Sarah cooked up a storming chilli on the final night which was followed by a magnificent Easter cake and Marie’s hot cross buns. Then, as the evening drew on, Jules decided to don a protective helmet and straddle – legs akimbo – the table in the Fylde mountain hut. The origins of this custom are unclear but it was a sight that will live long in the memory of those present. Damien clearly found it inspirational as he then completed the Fylde Hut Challenge in a series of breath-taking moves (particularly the final mantel-shelf). Other challengers came and went before Chris repeated the feat. The spirit of Sebastian liveth on…