The night above the dingle starry,
Time let me hail and climb
Golden in the heydays of his eyes…

Having driven several hours along the amazing A5 (it’s not just a paper size, you know!) watching the sun set over Snowdonia, I was eager to pitch my tent on arrival at Dolgam campsite.  Joe greeted me with his usual charm and affability: “You’re taking a bloody long time to get that up, aren’t you?”  Surprisingly, André was not much faster pitching his tent.  Surprising because, unlike my ancient geodesic design, André’s tent is of the pop-up variety.  Marie enthusiastically tried to help and the pair of them struggling with the springy hoops and canvas had the appearance of two people trying to play a giant accordion.

Tents pitched, the usual suspects were drinking whiskey and chewing the fat.  We noticed that a ditch and stream separated our tents from the toilet block in the corner of the field.  “Wouldn’t it be funny if someone missed the bridge and fell in during the night!” somebody suggested; “No” we soberly replied; “that wouldn’t be funny at all”.

Later in the evening Sarah decided to test the theory – turns out it was actually very funny indeed!

Several groups formed for Saturday’s fun.  Nick and Ollie set off early to Idwal slabs and completed 6 or so pitches to the top (almost).  On the first two pitches they were chased down by a couple where the man seemed to be teaching the woman the basics of trad climbing.  It’s difficult to judge the success of his coaching but, having seen the woman let go completely of the rope as he reached her belay stance, the man asked: “Why do you keep forgetting to tie me off?”  The chilling reply came: “Because I want the house”. 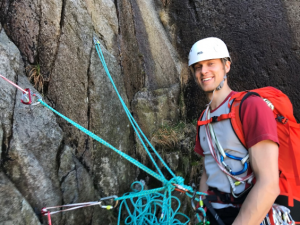 A second group of climbers tried their luck in the Llanberis pass.  Marie, Chuck and Kris taking on the ultra-classic Crackstone Rib while Helena and Nick Kemp were on the equally classic Direct Route on Glyder Fach.  The remainder of the climbers were on the upper section of Tremadog.

The walkers (Cara/Jasmine/Sarah/Wendy) ascended the picturesque and little known peak of Moel Siabod (872m) which was tantalisingly visible from the campsite.  The famous peatbogs (which had previously claimed 3 unsuspecting MMC’ers) were all but dried up and, after a decent grade 1 scramble up the west ridge, the party summited to spectacular views. 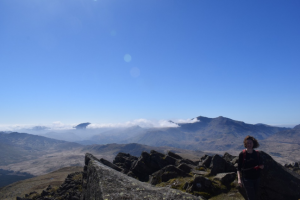 That evening in the pub we celebrated a special day for one of the MMC’s top blokes.  Yes, it was the first day of MMC climbing that Chris [I think you have confused the twins – ED] had not dropped gear belonging to someone else! 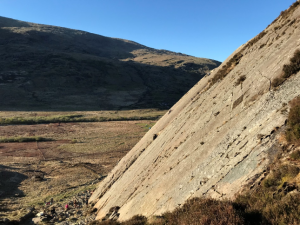 To the best of anyone’s recollection, everything went swimmingly on Sunday morning…anyway, two groups set off for Snowdon expecting epic views stretching as far as Ireland and beyond*.  One group took the lesser known and unique Rhyd Ddu path (it’s the only one with a Welsh name).  The other group took the scramble route of Cribb Goch and thence around the horse-shoe and back to Pen-Y-Pass.

At a particularly exposed section of the knife-edge ridge on Cribb Goch Joe sensed some nervous mutterings from Nick R.  Putting his military training into effect he immediately offered the calming reflection: “I wonder how many people have been horribly injured falling from here”.  Not being drawn into conversation Helena and Nick R pushed on ahead and tried to race the train to the summit. The train won.

Meanwhile on the Rhyd Ddu, Ollie made short shrift of the first section while the rest of the group took a pace perhaps more appropriate for Sunday brunch-time.  The group gathered on the Llechog ridge before making the last ascent along the Bwlch ridge – a narrow section with some interesting exposure.  At this point Marie pushed on past the train passengers and hand gliders to make her first mountain summit. 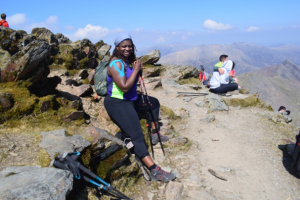 Finally, on Monday Sarah again fell into the some of the group took a refreshing dip in the river before a gentle walk.  Others were back up at the crags:  Ollie, now climbing with David, worried about maintaining his A+ gear placing standards just decided to stop placing gear.

On decampment, André again showed the benefits of his pop-up tent by taking little more than 30 minutes to strike and pack it away – remarkable!

*though it’s difficult to identify any notable features west of Ireland.