It’s a long way to Wasdale. Arriving at the campsite, and having been pointed in the direction of the mostly empty MMC pitches, I wondered if it had proved a journey too far for some of the expected attendees.  To my great relief familiar elements were in fact present next morning: Joe and Chris had turned up in a ridiculously small car; Ollie was eating his daily ration of baked beans; and Katherine was wishing us a good morning with the now customary “Has anyone got a stove I can borrow?”  The weather forecast was also looking good – we were set for another great meet.

THESE BOOTS WERE MADE FOR WALK-IN’S

On Saturday four teams made an early start for Wasdale Head hoping to be at the front of the queue on the climbs at Great Gable.  There’s around a 1 hour and 45 minute walk-in to the climbs but it’s a popular spot as it’s renowned as the birthplace of English rock climbing.  Much like a good birth there was plenty of sweat and heavy breathing as Ollie and Nick R ascended the steep scree slopes below Napes until the miraculous moment when Ollie shouted: “I can see the head!” and there it was: Napes Needle protruding proudly from Needle ridge.

Ollie and Nick R got straight on Needle Ridge (VD ***) and, following the four pitches of the climb proper, scrambled to the summit of Great Gable itself.  Chris and Joe, having decided to extend an already long walk-in by an hour or so (no, I don’t know why either), followed them up.

Meanwhile David/Alix; and Nick K/Katherine were on Tophet Wall (HS ***) a route which David and Alix have had on their tick-list for over twenty years. According the guidebook this is a true classic, winding its way through some very impressive rock architecture. MMC reviews were perhaps a little less glowing but that may have been due to the hair-raising descent down the red-scree of Great Hell Gate.

The teams met for some post-climb refreshment at the historic Wasdale Head Inn.  Whilst there Nick R spotted the opportunity to literally follow in the footholds of the pioneers of UK climbing (the sport, not the website) by tackling the barn-door traverse.

BLOW, WINDS, AND CRACK YOUR CHEEKS!

On Saturday night a tempest stirred up such as would inspire Bill Shakespeare to ready his quill.  For the not-so-happy campers the resulting sleep deprivation meant plans for multi-pitch mountain routes were abandoned (save for Anna, Adriano and friends who took their turn on Tophet Wall) for single-pitch fun.  Many headed across the valley to Long Scar said, presumably by those who have never been there, to resemble Stanage.  The rest took a mere two-hour walk-in to Piers Gill Crag which, if you throw salty-water in your face and cover your ears with sea-shells, is vaguely reminiscent of Bosigran.  The shorter routes inspired the climbers to take on stiffer grades: on Long Scar Joe sent two VS’s; Chris an HS; and Charmian and Susan (in their first trad climbing trip!) ascended a Severe.  Over at Piers Gill David and Nick K led the two star Pier of the realm (unusually graded VS 5a) and Ollie also looked to push the grade, attempting a VS where the “V” must have stood for “vicious”.  Ollie understandably backed off at a particularly bold section, so crag veteran Nick K tried his luck.  However, he was spat back down in dramatic fashion – thankfully landing on a soft ledge.  Back on Long Scar Marie and Cath had fun romping up Billy’s Climb and the curiously named Green Treacle.

That evening, having been turned away by the pub, Chris “Heston” Lloyd averted a minor crisis by firing up the BBQ and inventing the “scone burger” – who would have guessed that a fruit scone could so ably convey a burger in the absence of a bun?!  Later on drinks were quaffed and cake scoffed in celebration of the 30th MMC anniversary of our esteemed Chair Alix.

The sunshine held out on Monday so Alix and David were at another über-classic: Pisgah Buttress on Scafell; while others went to Wallbarrow.  Resting after the previous day’s drama, Nick K was peacefully taking in the scenery while reclining by the crag when suddenly there were multiple howls of “Below” from above and a piece of rock roughly the size (if not the shape) of a frozen turkey came hurtling down to make crater out about 2 cm from his position. Nick reminds us: Be alert at the bottom of crags as you don’t know what might happen!  Though before you put total faith in a helmet – I think I should point out that there is not a climbing helmet made that would have made the slightest difference if that rock had hit you.

Sensing that it was just as dangerous below the crag as on it, Adriano finally took the plunge and followed Anna’s lead on their first trad route together. 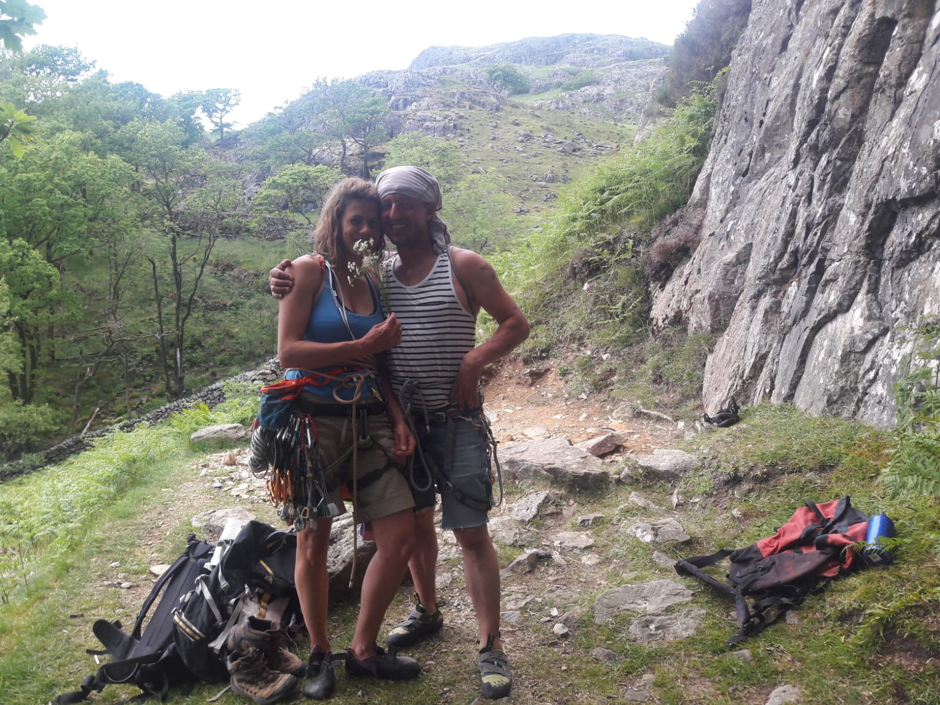