David, Marie and Nick R sat in the climbers café in Hathersage with cake, coffee and an enormous sense of satisfaction.  Outside, the sky was dark and the rain was heavy.  We’d all achieved our Stanage Popular Ultimate Classics Ticklist goals, viz: Flying Buttress (Marie); April Crack (Nick R); Hargreaves’ Original Route (David).  And with foresight that would have pleased Nostradamus we’d perfectly judged the moment to call an end to proceedings and were now happily sheltered, smugly thinking of Chuck and Chris getting a right soaking.  Michael and friends, sitting at the table nearby, were equally content.  Michael sipped his coffee dreamily, replaying in his mind the joy of constructing such a perfect anchor on top of Stanage edge. 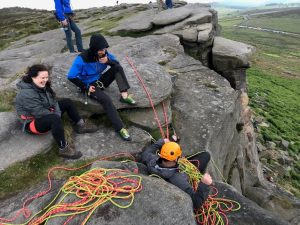 Team MMC had started the day in warm sunshine, enjoying breakfast at Hardhurst farm campsite.  This is a well-appointed and conveniently located site, but the far field is extremely close to the railway line – any nearer and you’d probably need to be in possession of a valid ticket or permit to travel.  Sadly the drizzle had begun by the time the new and prospective members were starting their indoor-to-outdoor climbing course.  The instructors therefore chose the sheltered Yarncliffe quarry area for the first day. 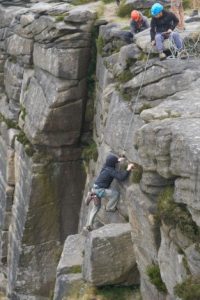 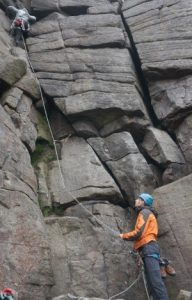 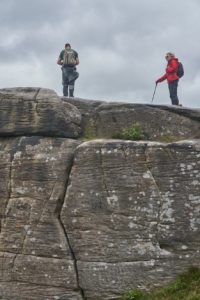 For the old and retrospective members the poor forecast did have the benefit of keeping people away from the crag, meaning that Stanage popular somewhat belied its name and we had our choice routes.  Paolo took immediate advantage of this by seeking out Unrep**table – a mythical four-starred E10 – with its famous double-dynamic moves on the finish.  Climbing like a cross between Peter Parker and a radioactive spider, Paolo easily balanced his way up CD-edge footholds to the first crux.  However, in attempting the next “running leap” move he slipped on a wet, and mysteriously placed, pine cone.  Using his ribcage to slow his fall, he escaped significant injury (except to his rib-cage of course!)*.  Meanwhile walkers (Alix and Wendy; and Sarah and Ian) escaped most of the inclement weather by cunningly stringing together tea shops and pubs for their routes.

That evening we all gathered to swap stories at Maazi curry house in Hathersage.

On Sunday morning, in an event that (this time) had nothing to do with Nick R, Ander was left behind at the campsite.  It’s not clear how that had happened but luckily Paolo, proudly driving his newly restored van the “Club Joker”, was there to save the day by collecting Ander and depositing him at the training crags.  In a further act of heroism, Paolo then picked up Alix and David’s van keys to save Alix and Marie from a veeery loooong walk to Birchens Edge from Hope!

Further thanks for the weekend:

Marie and Chris Es for a) having their phone charged and b) relaying messages between distant groups on behalf of everyone incl Ander, Alix and David.
Ian and Sarah for raising the alarm that Ander was stranded.
Charmian and Ardrian for cheerfully offering lifts all over the place to anyone who needed one.
Thanks from The Chair on behalf of all attendees to Nick Round meet lead and meet organiser. And Cath Billson Treasurer.  It was complicated! Both gave up a lot of their free time to pull off the largest meet and dinner we’ve had in several years.

*Paolo’s spare rib – Some accounts suggest Paolo was actually injured down climbing a Diff; but I find this pretty hard to believe!