Oh we do like the 3’s beside the seaside

Hot on the heels of the MMC summer vacation came this mini-break to the south coast.  History will record the summer of 2018 as an extraordinary season: the royal wedding; England’s triumph relatively good showing at the World Cup; and wall-to-wall sunshine for week upon week.  Therefore, with Portland resembling the southern Mediterranean and the MMC in peak condition following Winter indoor training and the Spring trad meets – it was time to get serious on the bolts!

On the Saturday we headed to Godnor North, which is a popular crag in the Cheyne Weare area (not Gondor North, which is the realm of Men in the Middle Earth area) and were immediately flashing grade 3(!) and grade 4(!!) routes with style and panache.  Following this early success, N and O thought it was time for a few high fives and climbed Ben and Willem (both 5a *).  D, who these days really is making progress at the higher grades, took things up a notch with a calm ascent of the one starred Dreamscape possibly a 6a but arguably a 6b (and yes, there were arguments).  The direct start of this route is climbed over a rather featureless bulge: P valiantly struggled to solve this problem before N unlocked it with a pleasingly sketchy layback move.  N then blotted his copybook by desperately grabbing at a quickdraw higher up on the route following which C, sensing that an “anything goes” approach was now permissible, took an even more dubiously ethical decision to pull on the first quickdraw so as to overcome the  initial bulge.  Meanwhile E, P and O mastered the neighbouring 6a Sidewinder with its evil finish. 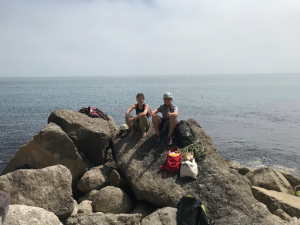 Moving along the crag a little, K completed her first outdoor sport lead with a graceful climb on the superb natural line of Tombstone (3c **) (one of the most ascetically pleasing climbs) and was followed up by W and Jo.  Never to be outdone on ascetic matters P then worked his way up the dully named Jacob’s Ladder (5a **) –  possibly the most famous climb on the crag.  After such a glut of routes on the first day we all assembled at the [budgie] Smuggler’s Inn next to the campsite for eating, drinking and much merriment. 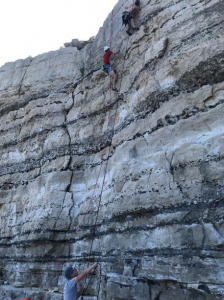 Not so relaxing at Godnor 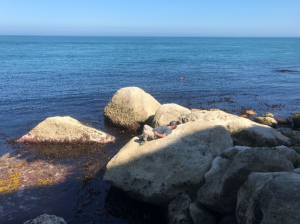 As if to emphasise its name, Sunday dawned ever more brightly and hot.  Following a leisurely breakfast and musing over the possible Deep Water Solo delights of Lulworth we settled on a plan to go to Blacknor North.  A surprising architectural debate took place on the walk in (D:  The guide says to follow the path by the old concrete wall; P: That’s not a concrete wall, that’s a gabion wall…) but we were soon looking up at the incredible flow-stone features of the main crag.  All took on and loved the sublime three star Slings Shot (5a) with its alien-like flow stone.  Cake Walk (6a) was also an amazing climb with brilliant crack to start, a little seat to rest on in the middle, and a sumptuous upper section on a 15 foot pillar of flowstone. Awesome climbing! 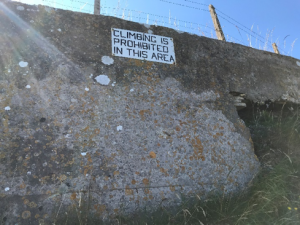 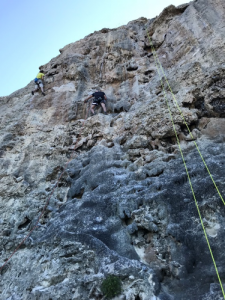 After the morning’s excitement it was decided that a more leisurely afternoon was in order and we decamped to Easton for fish and chips and ice-cream.  Thence it was on to the beach near The Cuttings (since ultra-keen E and O still fancied notching up a few more routes).  The rest of us paddled, swam and canoed (yes, Jim brought his bright blue kayak along “just in case”) in the best of the afternoon sun until it was time to pack up and go home.

Yes, this really is the English Channel! 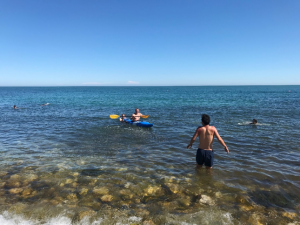