It is all about climbing, isn’t it? 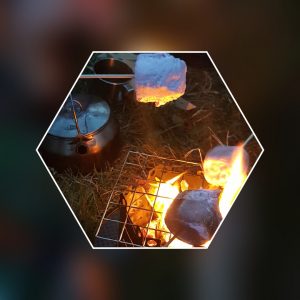 Before setting up on the trip, We started with a game of musical cars, which I have to say turn out to be wonderful. Everyone won a seat in a car.

Regarding the location, to be honest, I don’t think any of us seen any of Buxton on that weekend! “I know, I know, us Londoners can’t make a difference between Matloc 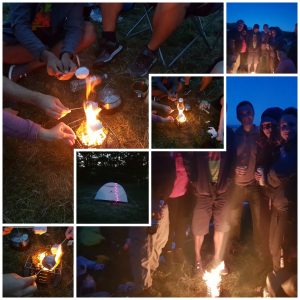 k and Buxton. Well, we were somewhere on the B5055, close to Bakewell. I do not want to dwell too much on my “excellent navigation skills” here. I have more important things to talk about: like the lovely campsite; we had almost a full field to ourselves. Party time!

Loads of climbing happened; they (Teams) enjoyed it so much that they did not remember the name of all the climbs. However, I do have some pictures. In Harpur Hill, the area were Sanctuary, The Playground, Cairn, and Lower Tier left and right.

In Horseshoe Quarry we climb from on Chocolate Blancmange, Upper Tier and Left Wall.

Nothing much! Katherine wonderful stove provided some much appreciated hot and goey marshmallow and heat. 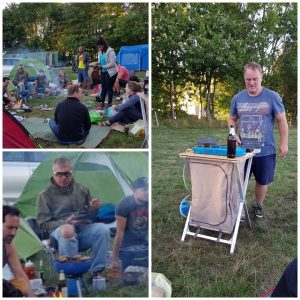 superstar Michael C had some shizzle grizzle going on for him, (nice potatoes). Jim super chef had a lovely set up too. Some of Team Skoda had a lovely double whammy yummy halloumi and beef burger with some jalapenos washed down with some rum.

David and Matt drove up just for a day of climbing, what an honour!

On Saturday evening, everyone turn out to be BBQ camping MasterChef!

Dd: Memorable climb had to be for Havens sake, a 6b on lead. Was a tricky one with an Overhang, which I managed to nail on final attempt with a cheer. Best part was trying to unravel a tight toe and figure of 8 knot at the end of it! ?

H: second route that Dan, David and I did in Harpur Hill. A horrible start was sketchy!

Funny stuff Dd: Had to be turning up to the wrong campsite on the Friday with no sight of the bikes on the car. Got there eventually ha!

H: Not sure about funniest but I did enjoy the roasted marshmallows!

C: Memorable climb second at horseshoe a 6a opened by Damian. I just top rope, but it was a good balance between strength with a crack start, a long “balancy ” rest of the route. Absolutely no idea of the name of the route

Ck: My most memorable climb was Coral Seas 6a at Harpur Hill. Great route. We got sandbagged twice(!) By a kiwi bloke from Wanaka who seems to have a poor memory for (lack of) foot holds and then sent us up a 6c+ instead of a 6b. Even that was too hard for Damien. The rest of the weekend was a blur.

After climbing a few route in Harpur Hill and Horseshoe quarry, L.  transformed herself into a sun mermaid by lying graciously on a rock to soak up the sun. 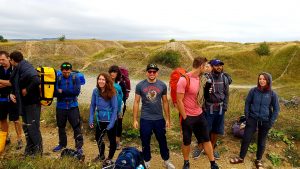 Memorable climb: Cs I led the first half of Neanderthal (4) in the Horseshoe Quarry – a nice climb with one super scary moment. Being a “shortie”, I had to find a way to hang off one hand with a tiny crimp and poor feet placement to clip in a few feet from a ledge (who wants to hit a ledge on the way down?!) with the wrong hand at a bad angle. That was fun! Not going to lie – I had a mini freak out.

Funny stuff: Dog with the biggest lips ever half-heartedly chased us on the way into Harpur Hill

R: I think the best climb for me was called Christian Salvage Man, which was a 6a that had a star, which I think I led! The funniest moment was definitely pulling in to do the U-turn to Harpur Hill and realising that not just Paolo was following us but 10 other cars were behind us following! Let’s say the co-driver’s navigation skill is on point, not sure which direction though.

Well, turned up in my VW Transporter Van, met some lovely French ladies, don’t really remember any of the names of the climbs unfortunately. They were mostly top rope. Enjoyed some synchronised u-turning in an industrial estate with a café which was open when we turned up but closed when I went for lunch!

J and I climbed (leaded and seconded) over 12 routes from grades 4+ up to 6a+, Can’t remember all the names.

Dm: A good venue for people to push their skills, top ropes were good. I found my solar powered limit at 6b. Favourite climb was coral sea 6a upper tier Harper Hill.

H: I think the funniest moment was when we were all queuing for the corner route because it was the only place with shade!! (Horseshoe quarry) 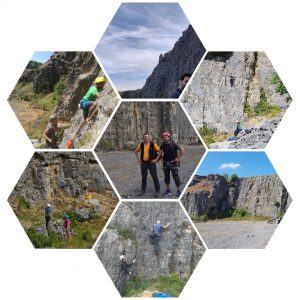 To conclude, everyone had a jolly good time, including Robin, he said the skiing and running at the weekend was good fun. Yes Skiing!!! Oh yeah! and that speed climbing he did on that long climb in the corner on top rope at Horseshoe Quarry. (Men at Work)

What was left behind? err… no one! Climbing shoes, rather small grey hoodie, pink quickdraws, and an ice cooler lid.