Making the best of grit…

Trudging up the endless curve of the youth hostel drive, through ceaseless rain and battling a bitter wind I reached what appeared to be the setting of a Victorian Gothic Novel. Disappointingly there was no eerie bell to ring so I stepped straight in out of the weather and contemplated the fact that precipitation in the latter part of 2018 was making up for its slow start. Never mind, being in the home of grit meant endless friction whatever the weather, surely? (Or does the lack of anything vaguely positive, in terms of holds, mean you need all the friction you can get?) 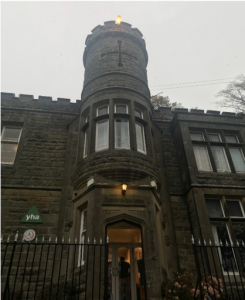 As it turned out, Saturday had an improving forecast and, after the perennially popular inclement weather activity of spending money (those Hathersage outdoor shops must love a wet weekend), the climbers all made their way to Birchen Edge.  As the Charmian had noted in her guidebook the “ROCK DRIES FAST!” here and we were all soon up and running climbing. Joe, Chris and Richard headed straight for a short but sharp route (perhaps expecting the rock under the overhang to be drier?) while others “warmed” up in damp chimneys.  Continuing a running theme, Nick had a list of classics he wanted to tick off.  On Birchen this meant the nautically themed Powder Monkey Parade (S); Sail Buttress (HS) and Topsail (VS), highly appropriate in the blustery conditions.

Heathcliff wasn’t home…Meanwhile, the walkers had planned and undertaken a route that took in the Barrel Inn – advertised as the highest pint in Derbyshire (geddit!?) – as well as a number of tea shops. This was revealed during the pub dinner on Saturday night, when some true athletes acknowledged that they were about to have their third dessert of the day. You can’t beat that Bakewell Pudding!

Back at the crag, most parties took on the enjoyable Porthole Direct (VS) – a route of contrasting sections. It begins with a blank-looking slab (thankfully completely dry by the time I got there…) and is followed by awkward moves into a small cave. During his ascent André made a move here reminiscent of a dog turning around in its kennel. Finally, there was a tricky crack – a perfect spot to practice jamming (gaining some trophy grit-rash on the way). 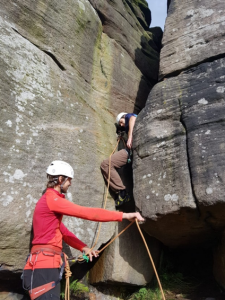 Incredibly the subsequent moves were even less elegant

Joe shifts his hangover
Two walking groups formed on the (apocalyptically wet!) Sunday. One lot of hardy hikers decided on a seven hour tramp, while the others thought a “petite Foolow” more appropriate. The latter involved couple of miles from Eyam to nearest village and then back, via a brilliant tea-room.