Pembroke fits neatly into the climbing calendar like having cold turkey for lunch on boxing day. The August bank holiday is still warm yet, with the sun setting noticeably earlier and the evening chill heralding the onset of autumn, there is a touch of melancholy in that soon the tents and stoves will be packed away for the winter. It is with this thought that we have always barrelled down the M4 into the setting sun to try and wring the best out of the tail end of the summer in one of the best climbing locations in the world over the bank holiday weekend. Maybe the somewhat patchy weather forecast or the lack of beginner crags played on the club psyche but it was only a cosy sized meet of 11 people who emerged out of the gloaming into the St Petrox campsite to set up in the moon shadow of the church tower.

On the Saturday, bristling with energy and wary about the rain forecast for Sunday, David and Damion bolted off to Mowing Word (crap name, brilliant crag) where they efficiently climbed Blowin in the Wind E1, Heart of Darkness HVS, and a nice VS 4b. David reports that Heart of Darkness was awesome. The only issue they encountered was Damion dropping a shoe into the Bristol Channel and having to go back to the car to get a spare. 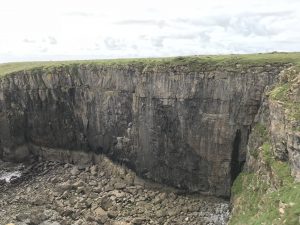 Meanwhile Nick R, Katharine, Joana and Ben had gone to the Stack Rocks car park and set themselves up at the impeccable routes of Bow shaped slab. Nick K and Gosia had gone a little further to Crystal slabs. The walkers, Sarah, Ian and Phil, had gone in the other direction towards the Lily Ponds where they ended the day with a swim.

After climbing the Stack Rocks crew returned to the campsite via Pembroke town to stock up on supplies. Back at the campsite a jolly evening of cooking, eating and drinking took place. 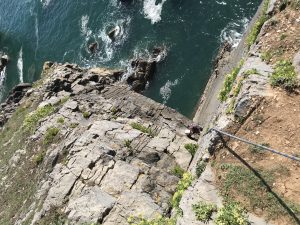 Well, rain had been forecast for 4 AM and with startling accuracy that is exactly what happened. A complete downpour that kept everyone pretty much tent bound until around 10 AM when people emerged in various degrees of dampness. One party went off to Stackpole quay for coffee while gradually the rain eased off. Then back at the campsite one party seized the clearing weather and trickled off to Crystal slabs while another group went for a walk around the stunning scenery of Manorbier.

After various showers the meet assembled at the St Govan’s Inn for dinner where the whole place abounded in climbing types and the last memories of the wet weather were expunged.

Monday was dry but with leaden skies and a stiff breeze. The walkers packed up and drove off in a neat self-contained group while the climbers went to Stennis head. There they mopped up some of the lower grade classics including the immaculate Myola which is a top 50 HS in the area. The day was somewhat enlivened, by a protracted rescue taking place at Bosherton head. We were later to find out that the accident was relatively minor (just a broken leg) but it was a reminder that ultimately climbing is an inherently dangerous activity.

And so, another Pembroke bank holiday weekend came to an end, thanks to all those attending for making it so enjoyable.