West is best…Easter in Cornwall

Crowded House famously sang “everywhere you go, you always take the weather”. Well, many thanks to whoever in the MMC brought the wall-to-wall (should that be crag-to-crag?) sunshine to Cornwall for the four-day weekend. If anything, it might have been too hot…the walkers elected to spend much of the time in the water, swimming or surfing!

For the climbers, Bosigran was the cliff of choice on Friday and, since most of us had pitched up (figuratively speaking – few of us had decided to risk canvas at this time of the year) on Thursday night, we set off early to avoid the crowds. Too early perhaps for Matt who’s driving directions to Nick suggested he was not yet fully awake: “Turn right!” he commanded, as we rolled down the narrow Cornish road. “No, not here, in about a mile.” he clarified as we swung out and then back into lane. Everything calmed down as we reached Gurnards Head and encountered a herd of cows on the moooove! [sorry] 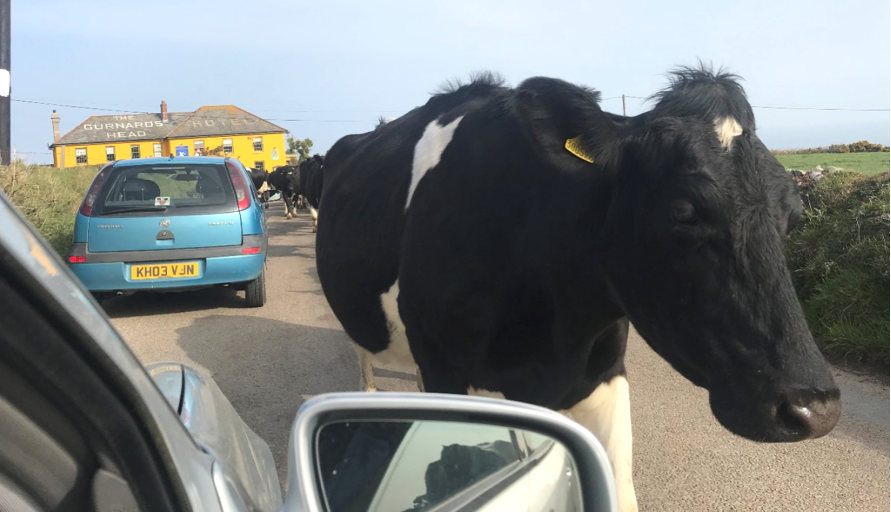 Having spent the night at the Gurnards Head, the cows staggered home

Once settled at the crag; Harry, Jobe and Alice got started on Doorway (S **); Nick and Ollie began Ledge (HVD ***) and Paolo, Stefanie and Alistair headed off up Andrew (S **). Things were going well for all three teams until the second belay points: Nick managed to miss the eponymous ledge and turned the climb into ‘Awkward Chimney’ (ungraded); Paolo’s team wandered off on the Rib climb, while Harry and co had some rope trouble combined with communication difficulty. “The rope’s stuck” Jobe shouted. “Don’t climb, the rope’s stuck” Harry cried. “I’ll sort it” Jobe answered. “Don’t worry, I’ll sort it” Harry replied.

The walkers (Jules, Gemma and Jasmine – later joined by Sarah travelling on the Riviera Express train) avoided these shouty clifftops and set off to St Ives. They did not report meeting any men with multiple wives, but they did succeed in buying wet suits so as to make the most of being by the (still utterly freezing) sea.

Meanwhile at Bosi, David and Elman had sought out the more serious route of Anvil Chorus (VS ***). David’s proposal to climb with Elman had seemed a friendly gesture: show him a few great routes on a crag he’d not previously visited. As Elman later explained, the gesture was, perhaps, a little less magnanimous: at the crux pitch David had suggested that Elman lead; noting as he set-off that “there’s been a number of accidents here so don’t forget to put some pro in…” We found out later at the Gurnards Head pub, all had ended well, and plans were made for the following day. 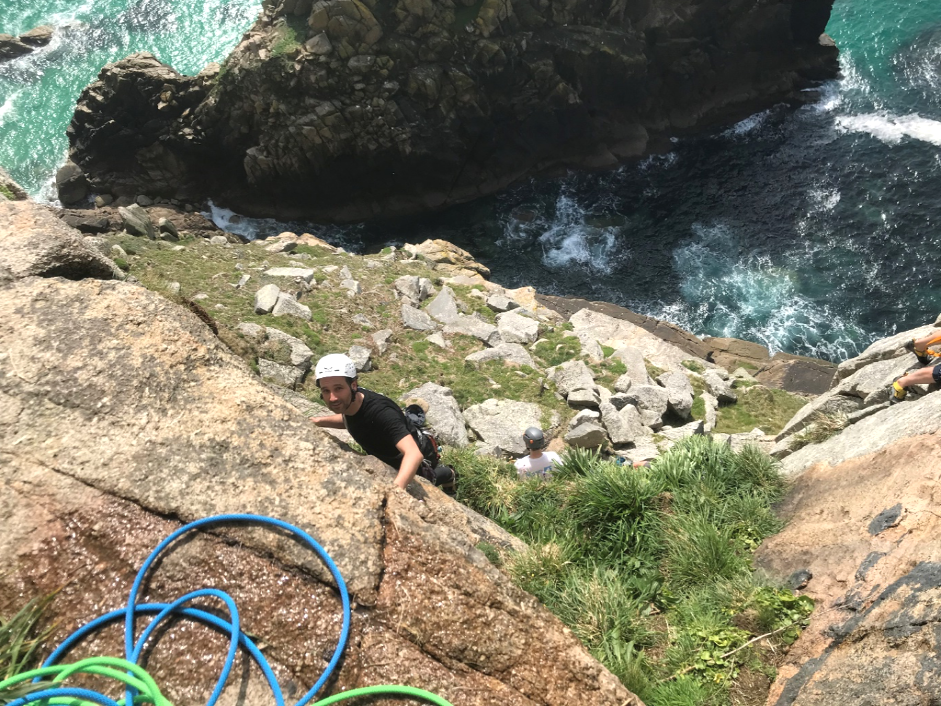 On Saturday our esteemed chair, Joe, made a cameo appearance ticking off some routes with Harry at Bosigran. Timing their trip with the tide, Elman and Uri; Katherine and David; and Ollie and Nick set off early to Chair Ladder. Once there, Ollie and Nick completed the mega classic Pendulum Chimney (AKA – there’s a lot of chalk here – oh no, it’s guano again) while David and Katherine took an exploratory line that included the first pitch of Detergent wall, the middle pitch of Pendulum Chimney and a final pitch of Neptune 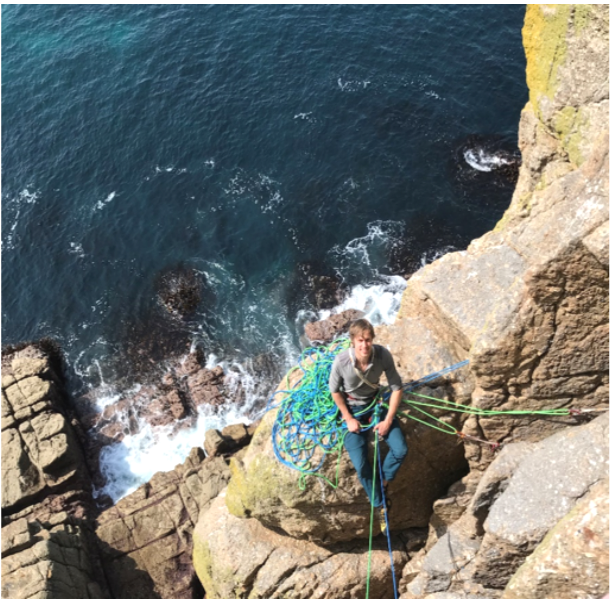 However, the real exploration at this time was ongoing back at Bosigran. In two teams: Chris, Joana and Matt plus Paolo, Alistair and Stefanie, were taking on the famous Commando ridge. They were not alone and had arrived at a somewhat “leisurely” hour. No problems – it’s only 8-9 pitches – how long could that take…

Team P/A/S made reasonable progress and were tucking into a pub dinner by 19:30. As for C/J/M, well, at 20:00 it was amusing, by 21:00 we were concerned and come 22:30 we were quite worried. However, at around 23:00 the adventurers returned – caked in mud and full of stories. Essentially, the story was ‘started late…moved slowly…it got dark’ but of course there’s more to it than that – here’s Chris with the low-down:

“When we arrived at the base of the climb there were multiple teams at various points on the long path down the far side of the ridge and as it turned out, a couple more on the near side at the starting ledge. We therefore sat for about 2 hours before even getting stuck in, tucked on a small ledge, peering round and relaying information back along the line as teams set off. We were climbing well but obviously taking too long, the traverses providing plenty of interest, and always expecting the pitches to become scrambles sooner rather than later (they didn’t!). As it started to get dark the climbing became very precarious as we couldn’t see any footholds. Finally we got to the top of the ridge around 22:00, with Matt lowering to the walk off escape and Joana gratefully accepting an abseil off in the other direction from the team behind. Re-united at the top, with the added bonus of a head torch from the gear left topside, we sent down ropes for other escaping parties on the final climb/walk-off and then had to pick a path between the drop into the bay and the bog to get back to the car. Unsurprisingly we failed in this and all ended up trudging through foul mud up to our shins. We were exhausted and hugely grateful to find some food still cooking at the hut when we returned, which only left the gear retrieval mission the next morning in order to feel we’d really finished. How long can it take you asked Nick? Guess that makes it a solid 24 hours!” 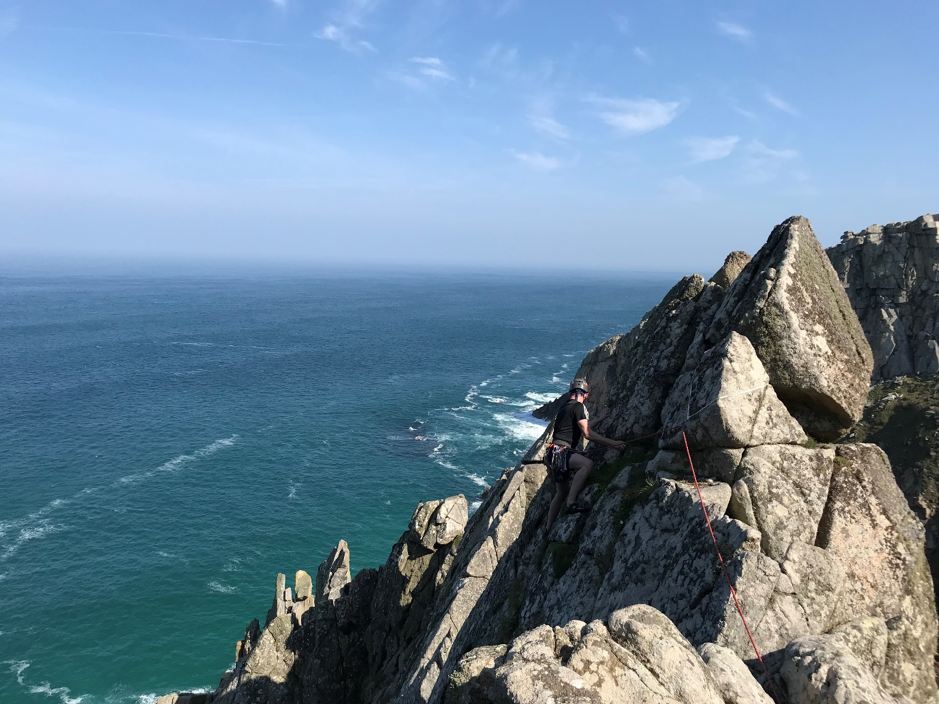 On the final day Harry, Jobe and Alice; and Paolo, Alistair and Stefanie decided that what they really wanted was a long climb. Fortunately, there is such a climb, The Long Climb, (VD ***) to be found at Land’s End. Both teams completed the climb with style and without incident (well, unless you count the bit where Alistair fell headfirst down the cliff as an incident…). Alix, Sarah, Jules, Jasmine and Gemma joined this jaunt to the edge of Britain but (given the heat) eschewed a long walk for the chance to surf at Sennen cove. The trip ended blissfully with drinks on the beach.

Meanwhile, back at Bosi, David and Ollie were continuing their trawl of the greatest hits (Dong and Ochre Slab get highly rated) and a rescue party was formed to recover the gear left at the top of Commando Ridge. On the walk in, memories of the previous night came flooding back – “Oh, so this is where we left the path and ended up in a bog…”; “Look we could have easily escaped at this point without climbing the final pitch…” The mission complete Joana, Olivia and Pedro all set off for the beach. Chris, Matt and Nick were concerned about staying hydrated in view of the severely rising heat so they made their way to the pub, first in Zennor, and then meeting Katherine in St Ives. This turned out to be a great decision as there was a real holiday atmosphere in the harbour town. We installed ourselves at the Sloop Inn (dating from 1312 and supposed to be the oldest pub in Cornwall) where, joined by more and more MMC’ers as the night came on, we were treated to costumed locals (including the landlady who was dressed as a clown) and live music. Many thanks to Chris for organising a fantastic meet.

Fun in the Sun at St Ives