The Borrowdale Road tip-toes south from Keswick in an oblique curve that skims the edge of the silver oval of Derwentwater before nestling itself unobtrusively in the foot of the Borrowdale Valley. The gentle sight of lolloping lambs enjoying their rich green pasture is then set against the backdrop of suddenly soaring fells. These enclose the traveller in a gorge of emerald and grey as the road arcs west through Borrowdale and Seatoller. It was here that MMC made camp for the late May holiday. All except Alix and David, of course, who were sent up the road to Seathwaite so as not to sully the club’s reputation by bringing a tow caravan. 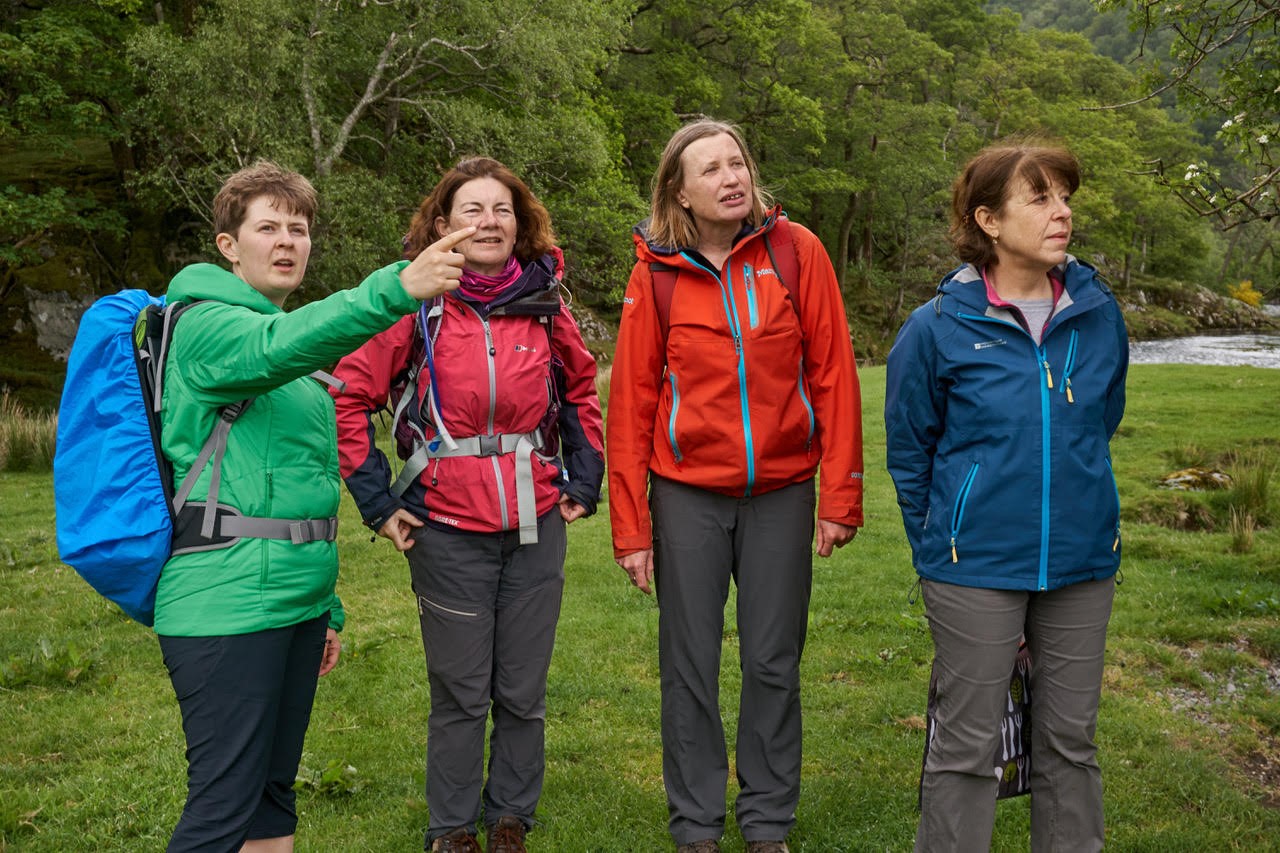 Is it a bird, is it a plane…?
Joe and Nick had arrived early enough on Friday to complete the much-laurelled* Little Chamonix on Shepherd’s Crag. The rest of the MMC flowed into the campsite in dribs and drabs as the night wore on.

Several teams formed for Saturday fun: Joe and Nick set off for the multi-pitch mountain route: Gillercombe Buttress while Charmian, Enric, Chuck, Stefanie, Harry and Marie opted for Shepherd’s crag. A team of walkers (Cara, Sarah, Wendy, Cath and Ian) strode out to Glaramara. David climbed with Rick on High Crag on Red Pike, Buttermere. They ticked an HVS before the drizzle started which stopped play on Rick’s E1, but they found a pleasant VS which was doable in the conditions. It was a long walk in and out. Meanwhile Alix went for a short walk with a blow-in friend from Edinburgh, Helen, and then they went for a surprisingly tolerable dip in Derwentwater.

Having completed Gillercombe buttress in good time, and enjoyed an excellent cream tea, Nick and Joe looked on UKC for a nearby crag to explore. The suggestion: “Unknown slab” with its three un-starred routes (“Unknown I” to “Unknown IV”) proved rather anonymous. Nick did get to practice some gardening skills though. 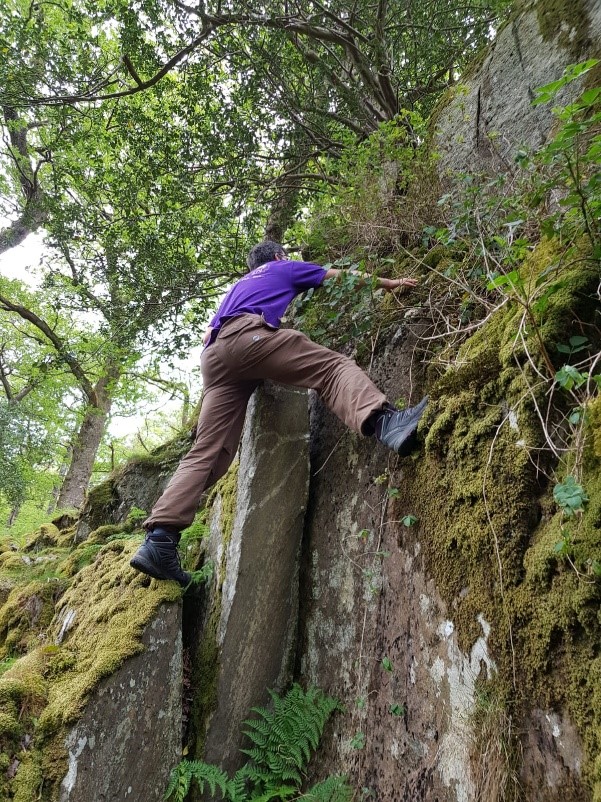 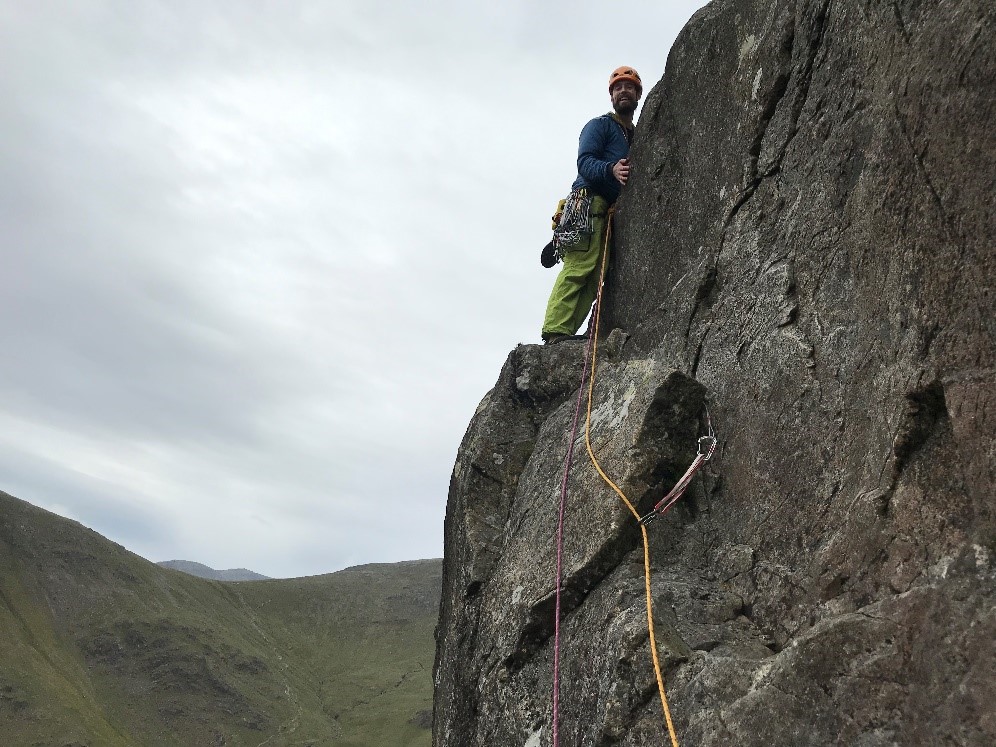 Joe on Gillercombe
In the pub on Saturday, Harry produced his new guide to ‘alpine’ routes in the Lakes. This fantastic little book has a number of alpine style routes in it, all of which involve a walk, a climb, and a scramble. One of the routes began next to the campsite and, after a few sherbets, many of us enthusiastically pledged to give it a try on Sunday when some showers were expected to curtail normal climbing. However, as it turned out, the weather on Sunday wasn’t bad…it was somewhere between awful and cataclysmic. In spite of this Chuck remained keen, and he turned up outside Harry’s van in his Mexican army outfit (a sandals and camouflaged-poncho combination) at about 10 a.m. ready for whatever the sky could throw at him. 8 hours later, in picturesque evening sunshine, Chuck explained that the sky had thrown much at him. In fact, the climbing section of the route had been like ascending a waterfall – the sense of exposure diminished by the misty rain that obscured everything around them. 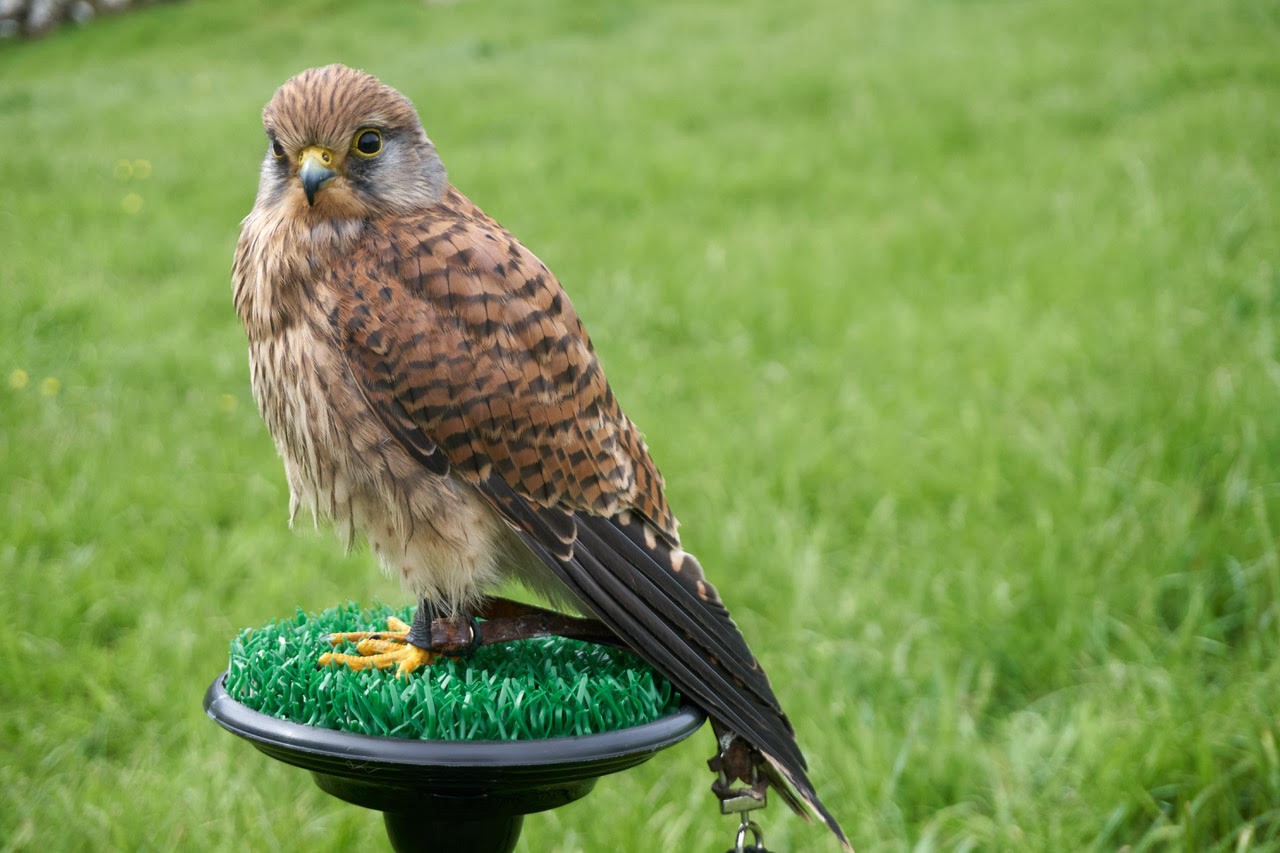 …it was a bird (inexplicably at the campsite).
The rest of us very sensibly joined the masses in Keswick for our usual wet-weather vice: gear shopping! Once all possible cams, micro-nuts and bargain-bucket karabiners had been examined (and paid for…) we had lunch. With the rain now easing, some of team MMC then strolled back to camp following a pretty meander around Derwentwater. Meanwhile, Alix went for a walk up Sourmilk Ghyll which had turned from a pathetic trickle to full on burst-water-main overnight, with the rain. 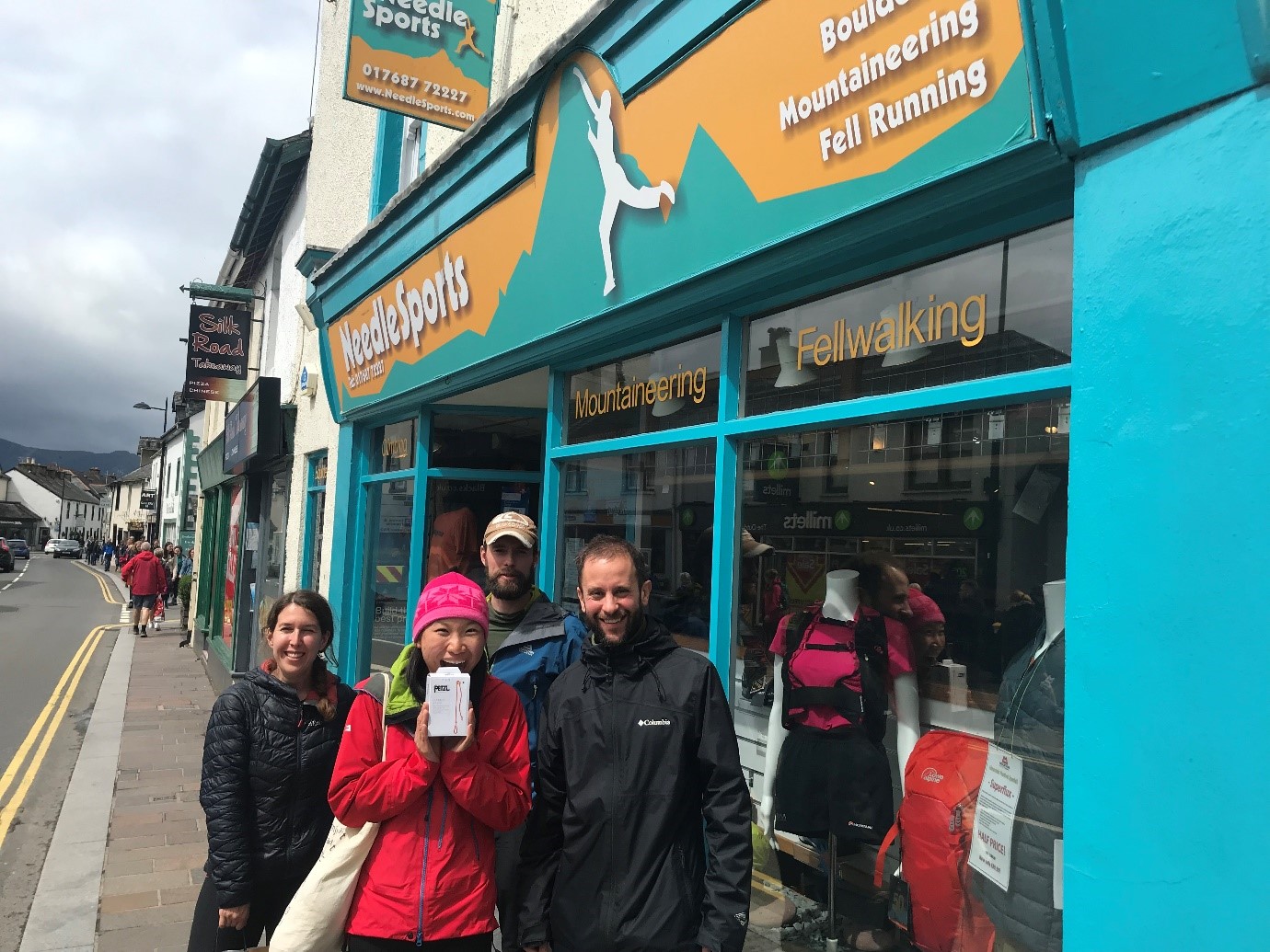 Look at what you could have won!
Joe, Charmian, Enric, Nick and Stefanie thought they would make the most of the evening sunshine by tackling some routes on the nearby Glaciated Slab. One problem: the rain had decided to un-ease on the walk-in and they were now getting very wet indeed. 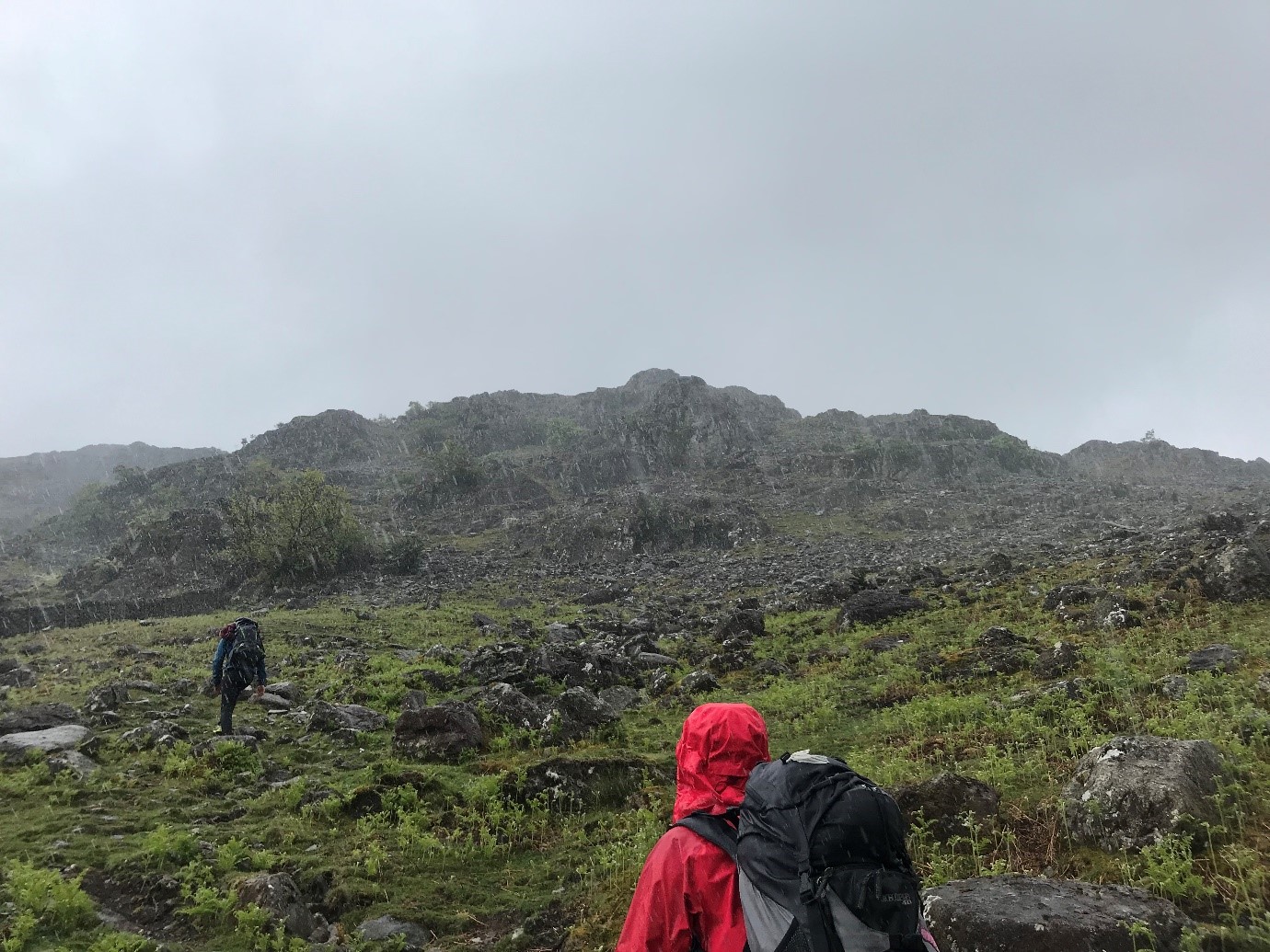 Lovely weather for ducks climbing
However, it soon dried up and a great number of routes were enjoyed on perfect rock. Just as they were completing the final climbs and looking forward to a hot dinner, a mysterious figure in blue appeared on the horizon. Carrying a rucsac big enough for an expedition the figure strode purposefully down the valley aiming straight for the climbers. Wondering whether to run (in retrospect a sensible idea) or hide; the climbers merely stood mesmerised by the approaching stranger… 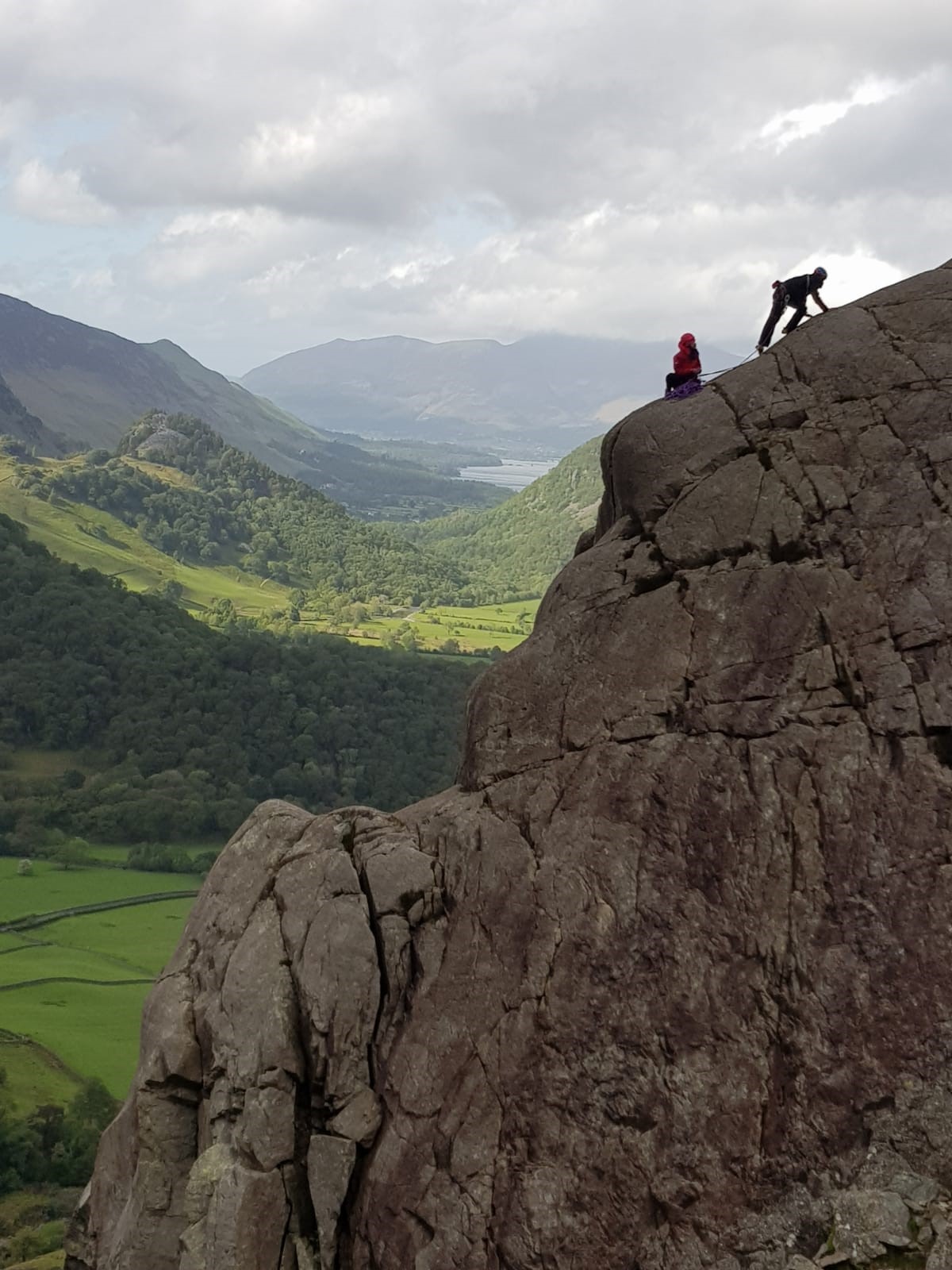 A few hours later…the beauty of Borrowdale revealed
Finally they recognised the steely expression: it was David Dees who, having hiked for over an hour from his campsite (allegedly on the ‘direct’ route to the crag), was now looking for some evening japery. Sportingly; Joe, Charmian and Enric stayed at the crag for a re-run of the previously climbed routes and Mr Dees heroic efforts to get in a climb were rewarded.

The weather did not improve markedly on Monday, but Alix and David joined Cara, Cath, Wendy and Chuck on a tour of Castle Crag and nice stop at the café in Grange which delighted everyone with cake to suit all manner of dietary requirements. 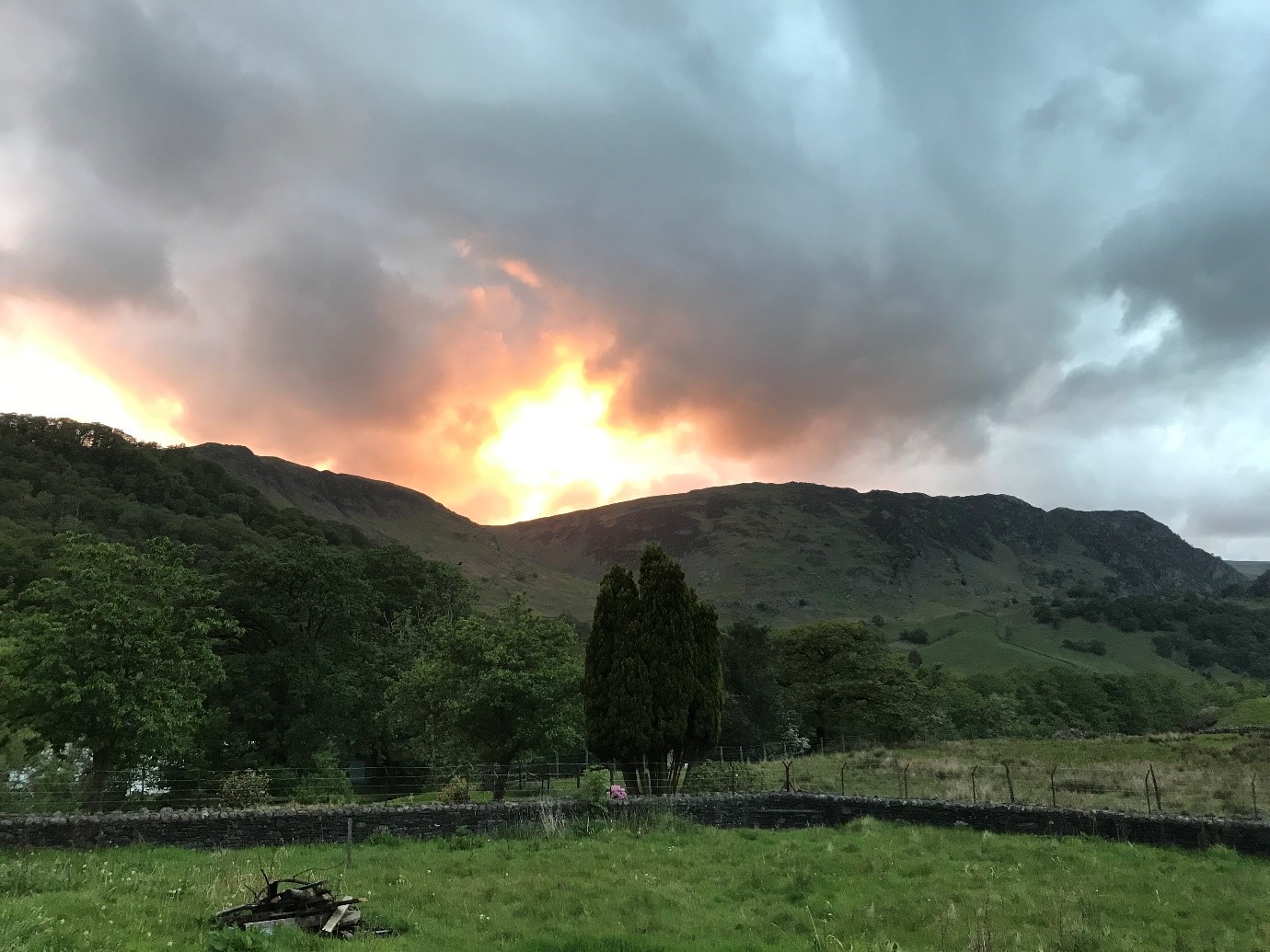 * ‘highly praised’ as opposed to covered in greenery