A meet for all seasons

This year the club pitched up at the Snowdon Base Camp near Rhyd Ddu. This is a comfortable, well-appointed site in an attractive location by a mirror-grey lake and burbling stream that runs along the base of Wales’ loftiest peak. The toilet paper was very soft too. 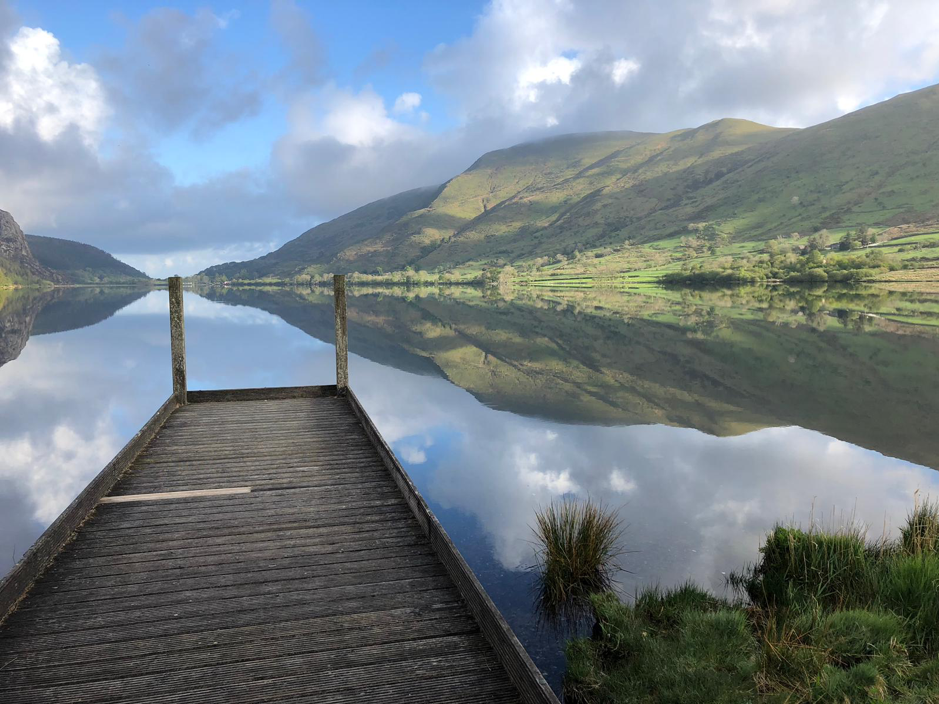 The beauty of the location was somewhat enhanced by the sprinkling of snow that fell on Friday night (somewhat un-enhancing for the comfort of the campers) and which now highlighted the upper reaches of Snowden as team MMC considered the options for Saturday morning. Bedecked in belay jackets, hats and gloves, we sipped coffee and chatted through the multifarious crags that were within a 30 minute drive.

“We’re planning to climb on the upper tier of Tremadog” Joe suggested; “It will be out of the wind and in full sun by midday”. “Ollie and I fancied doing a multi-pitch mountain route” Nick explained. “It will be freezing cold and unpleasant on the high ground!” Joe laughed. “I don’t think it will be so bad” Nick replied. About two hours later Ollie and Nick were 1.5 pitches up the 6 pitch Outside Edge route on Cwm Silyn. Another team had just overtaken them and neither climber fancied removing their gloves in order to lead the remaining pitches. “It’s really freezing cold and unpleasant” Ollie said. “Yeah, shall we go to Tremadog?” Nick proposed. “That sounds like a good idea…” Ollie agreed.

Joe, Will, Marie and Cara were already having a splendid time on this sheltered and sunlit crag. Joe led a skills recap and then Marie led her first trad route, seeing off Central Staircase (VD) with élan. In the mean-time David and Katherine were on the lower tier enjoying an unseasonal Christmas Curry (S ***) before taking One Step in the Clouds (VS ***). Matt and Alison were also at Tremadog lower tier having a trad leading course with Plas Y Brenin. 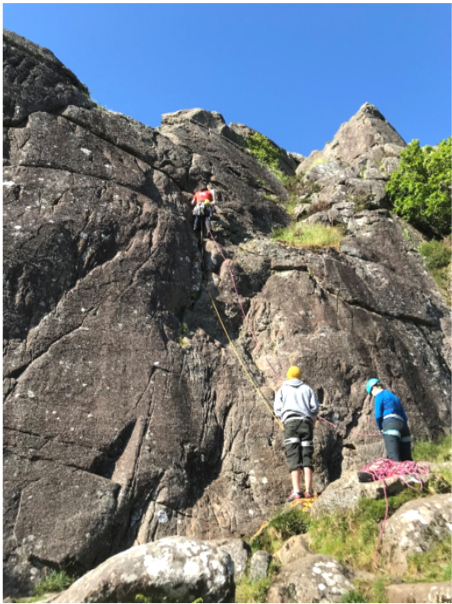 Steep, cold and scary or sunny, sheltered and single-pitch… take your pick

Completing the pack; Harry, Jobe, Paolo and Chris had opted for the much celebrated Creagh Dhu Wall (HS ***) with its famous semi-circular traverse (first a feet only section and a hands only part). Harry later recounted his first experience of this notable climb: “I was seconding and the leader had somehow contrived to crawl along the hand traverse with one leg placed behind the flake that is usually taken as a hand rail. The reason for the usual technique soon became clear as my leader’s leg got stuck part way across and he was faced with the “interesting” prospect of doing a partial handstand in order to free it and get both legs underneath him (as is the orthodox position)”.

A warmer morning on Sunday encouraged Cara, Andrew, Alistair (and Ellie the dog) to venture up Snowden while Chris went running over all manner of 3000ft peaks. Meanwhile, Ollie and Nick, and Harry, Jobe and Paolo tried their luck again in the high mountains – this time over in Ogwyn. H/J/P had their sights set on Tennis Shoe (HS ***) at the Idwal slabs, while O/N wanted to bag the peak of Tryfan via one of the routes on the East face. I believe Tennis Shoe is so named because the first ascent was done wearing nothing but Tennis Shoes (probably with a hemp rope tied around the waist, a freshly lit pipe, and an expression of heroic nonchalance). Later in the pub this prompted a discussion of the best trad shoes to wear: all agreed that there was no point wearing extreme rock slippers – comfort was key. Harry spoke fondly of his £30 bargain boots while Nick professed his deep-felt love for a pair of old blue evolvs. 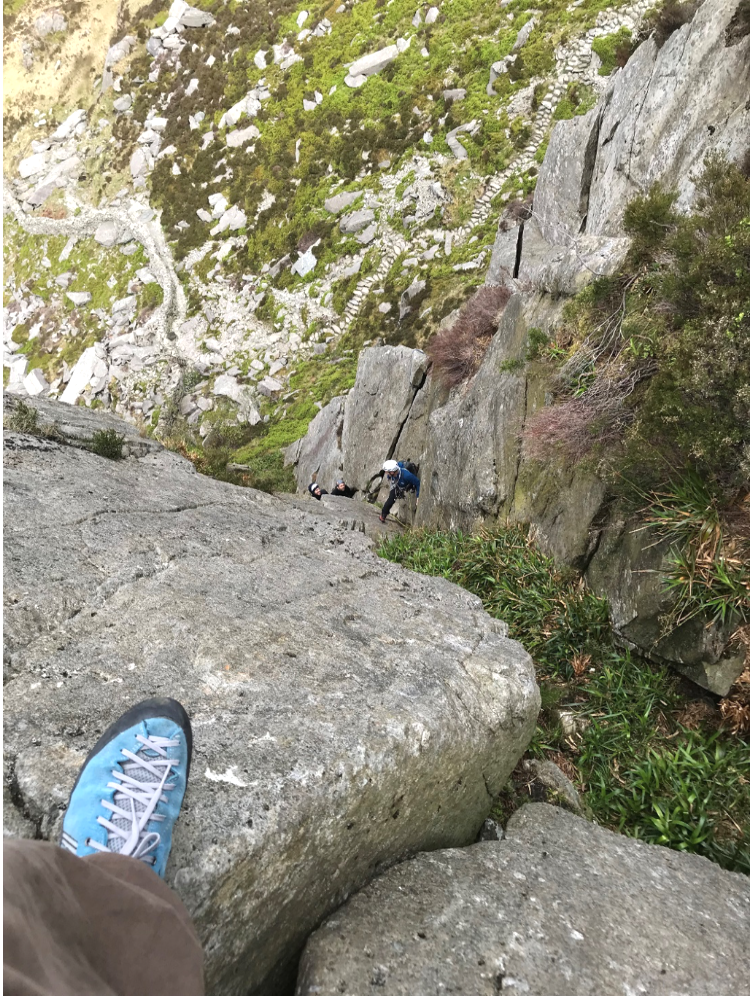 There are three classics routes on the Tryfan East face (all multi-pitch/multi-starred VDiffs): Grooved Arete; First Pinnacle Rib and Gashed Crag. The queue to get on Grooved Arete was positively post-offician (note to younger readers – post offices used to be famously busy places) so O/N settled on the deserted looking First Pinnacle Rib. Hail started to fall just as they began and a slither of doubt crept in – would this prove to be just as unpleasant as the previous morning? As it turned out, the answer was a definitive “no”. This was type 1 fun pure and simple; particularly the “infamous” yellow slab pitch and finale up Thompson’s Chimney (S).

Back at the campsite a traditional MMC BBQ (i.e. chaos and fire) was in full swing. Matt decided to mark Paolo’s birthday by cooking him a steak dinner followed by a blood offering. Fortunately, Marie and Andrew were on hand with helping hands to help Matt with his cut-up hand (very handy). 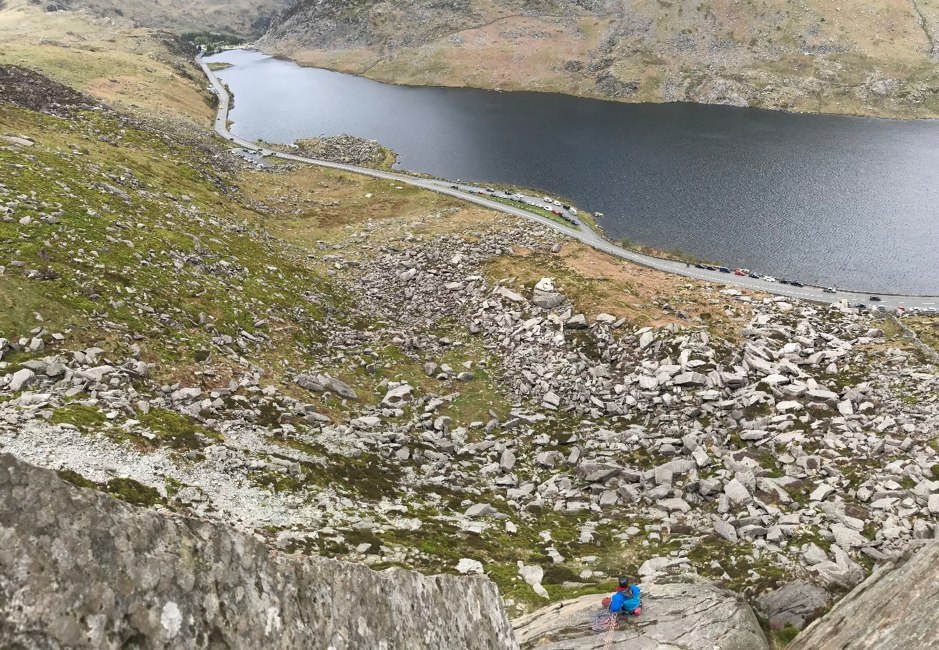 Monday was warmer still and more mountain magic beckoned. Will and Katherine explored routes on Little Tryfan while Ollie/Nick and Harry/Jobe/David sought out further excitement on the main peak – this time heading for Milestone Buttress. H/J/D slipped and slid up Soapgut (HS **) while O/N completed the fantastic (though polished to a mirror-finish) classic Direct Route (VD ***). Thus finished the weekend – many thanks to Joe for organising an awesome meet!