17 MMCers arrived in Dartmoor, staying at the picturesque campsite of Beera Farm Campsite. Whist sporting a wide range of recycling bins, the campsite only had one shower. However – it does have a river – which proved adequate for most and a hit for our youngest member. After late night arrivals – the day started with the normal borrowing of milk / coffee / tea, and a good deal of discussion on where best to go.

Dewerstone was selected, and almost all of the party made their way to the beautiful secluded crags of The Dewerstone, on the banks of the River Plym.

Philip headed off for a walk to Wigford Down, heading north with expansive views and some prehistoric hut circles. Down through thickly wooded valleys and up to the moorland and crags on Sheeps Tor, with grand views to the centre of Dartmoor’s great massif. Then a circuit through the woods around Burrator Reservoir. There is an impressive dam at its southern end. There the long walk back to meet the climbers back at Dewerstone through woods and valleys and over moors.

Oli, Chris, Satish and Stef collected a minimal rack (some nuts, hexes and 7 quick draws) and one (rather long) rope, and set off to climb Needle’s Arête. Oli was fresh from a trad course, and undertook his first (?) un-guided lead. It was a three pitch climb and proved to be a splendid opportunity for the team to practice siege tactics – Oli would lead one pitch, bring up the second, drop the rope for the third, and then drop the rope for the fourth. The second belay was a ledge fit for one – but all four managed to huddle together lashed onto the rock with a spider’s web of rope. The outward bounds course teaching abseiling next to the group seemed to be quite amazed by the sight of the team.

The day of climbing ended with a couple of gear rescues. Jobe and Paolo rescuing some gear for Marie and Alison who had meandered off route. And then Harry repeated Leviathan after Jobe and Paolo tested the legendary fall holding capabilities of a Totem cam. Half way up Leviathan, Harry remembered that he had done the exact same thing two years previously. Turns out that it is not a good idea to climb Leviathan at the end of the day.

The full party then made their way to The Totnes Brewing Company to test whether the MMC can organise a piss up in a brewery – it turns out they can. The youngest member of the party also celebrated his seventh birthday – possibly an unusual location for a seventh birthday, but hopefully a story that went down well when returning to school. 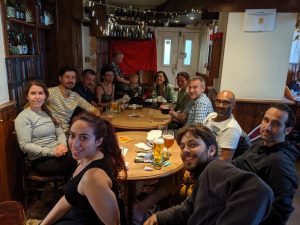 Day two took the team to Haytor – located within stumbling distance of the car park, handy for those that sampled the 9% ABV beer the night before.

Philip and Anna headed off on foot, they searched out the archaeological remains of the Haytor Granite Tramway, one of the world’s oldest railways (c1820) and the only one with its rails made out of stone. They then toured the area for ascents of the biggest and most impressive tors within reach, the highest being (473m), where they had lunch, with great views. In the afternoon they trekked out to the bounder-strewn Hound Tor. More great views, and some more archaeology: here they explored the remains of a medieval village, so well preserved that you imagined you could build it up again. They then descended into a deep valley and briefly rested by a mossy-banked stream, where we admired the silvery-blue dragonflies. Finally, a big push back up the hill to join the climbers back at Haytor Rocks. 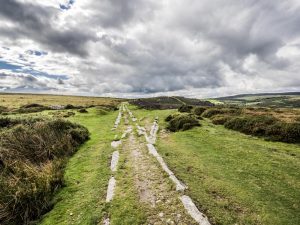 The climbers, after the fiasco of the gear the day before, split into sensible groups with enough gear each and ticked off all the easy and moderate climbs on Haytor and Low Man.

Chris waited above (gaining a wicked accidental sunburn and cool points with the tourists) to assist with the anchor setting while Satish gave leading a shot. He found that he didn’t quite like the style while Stef smashed it – her first trad lead and that was without lead practice during training. Phwoar!

After some convincing from Stef during lunch, Chris led the route and surprised herself by swooping right up it. It helped that she had already been up the route via top rope and spent most of her time jumping around on top.

The rest of the time (lunch) Chris, Stef and Satish offered helpful advice from the ground to Marie’s group who were trying to figure out what looked like a very shiny boulder-start for a Diff! They later found out that the route is best solo’d. Ridiculous.

Harry and Jobe headed up Raven’s Wing and then negotiated a rather nerve wracking step into the air on Levitation. Meanwhile Paolo, Katherine and Oli negotiated the rather unpleasant Raven’s Gully. Oli then led Raven’s wing – his second (?) un-guided lead – and a VS, likely one to watch with that progression – he had seconded trad for the first time only two weeks before.

Nick and Gosia also climbed Raven’s wing, and then tried a couple of unpleasant severes. It turns out that the Severe grade is as described at Haytor.

When the walkers arrived, the full team saw that an ice cream van had arrived at the car park – and we all headed down for a pre-drive Mr Whippy. Much high-fiving was done, and the MMCers departed back to London and the joys of service station dinners.