Portland is a very popular spot for London-based clubs and with 18 MMC-ers joining us for the full weekend and two for a single day, it was a pretty darned good turn-out.

The weekend started off early on Friday with Damien, Marie, and Stef leaving early enough with plenty of time spare to set up in the best spot in the camp (excellent) and head off to the Cuttings Main Cliff – not without getting lost in the harbour first, of course! It was those boats, the co-pilot (our wonderful membership secretary) decided they were more interesting. Ha.

From what I’ve been told, Damien flew up the routes and along with the ladies, hit up Jam (4c), Chips with Everything (5a), Quality Family Day (5a), while Amen Corner (5a) received a few amens!

The rest of us battled the traffic in and most of us managed to make it before sun down to set up our tents and observe Richard’s wilt terribly.

After settling down for some chatter in the dark like a flock of climbing birds, we were joined by Joe and Satish as they stumbled through the bushes having “discovered” the Smuggler’s Inn.

Most of us headed off to Blacknor North. The way down was an interesting one – you pop down the side of the cliff using your climbing skills, a head for down-climbing, and some via ferrata style pins in the wall. Not everyone was a fan, and I wouldn’t want to use the route after a storm, but easier than the coastal approach. That would have taken forever! Here we met one of our one-dayers, Steve.

The climbs were excellent and there was a huge variety to pick from.

Joe decided he was [going up] Talking Smack (5+) for a warm up in the Reptile Smile Area – only he wasn’t. Part way, some of us noticed he was going up Reptile Smile (6a+) a direct route upwards providing a rather more testing warm up than anticipated on flowstone. He was far too busy trying not to fall, so we didn’t want to alert him to his obvious predicament. The route induced much, much swearing from all who tried/completed it. Slings Shot (5a) was also on the list.

Meanwhile, Steve decided to break his rules about ‘never warming up on a 6a’ and warmed up on Apfelstrudel (6a) with many of us following soon after. With a delicate start, slabby blank(ish) section that saw Steve’s makeshift emergency pipe-quickdraw get some use, and a boulder finish, it was a wonderful route that was a massive hit with everyone. 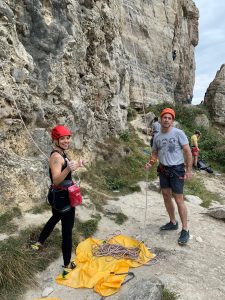 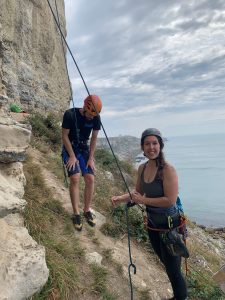 Shit Happens Actually proved a popular pumpy route. I encountered Joe returning to the ground looking like he regretted ever going up (what did you do to yourself Joe?!) while Stef hit excellent angles and reported thoroughly enjoying the route.

To the right, Birthday Girl provided many swear words following a cascade of rubble from the cave to the right. It was also a great source of amusement when one leader decided they really didn’t like the route. The climb turned into a team bid where Oli made a couple of short climbs up the highest scramble point so he could pass up/receive a fully extended clip stick. I shan’t be revealing who, I promised to keep them anonymous!

Next up, half of the group packed up and headed back while the rest tested themselves on Pregnant Pause (6a+) and others. They apparently had a very good time.

No idea what happened to Paolo. He was climbing though (I think…).

Battleship Back Cliff saw the remaining group, Marie, Satish and David hit up Braer Rabbit (4), This is This (4+), Hate the Sin Love the Sinner (4+) and A Dream of White Porches (5).

They rudely discovered why the rest of us did not want to go there – the fours are polished to the hilt and there are queues longer than coffee shop chains for the last. Ack!

Back at the campsite, Jasmine had a wonderful time chilling out and reading her book at the beach without us. Exactly what a relaxing holiday should look like – none of this exercise business we climbers are somewhat obsessed with.

In the evening we had an excellent time at the pub, eating much of the awesome food and enjoying the sea breeze. We were, of course, some of the last groups standing (err… sitting).

The weekend wouldn’t be a classic Portland trip without a visit to Godnor Far North in Cheynes Wears. An excellent venue with a fantastic boulder field to navigate made more interesting with the tide in.

We hung out in the left-hand end. Almost everyone climbed some or nearly all of the routes in this section – an impressive feat!

It was great to see a couple of new members climbing sports routes for the first time (including one who had only climbed at Bowles Rock’s) and randomly meeting Francine and her climbing partner, who joined forces with us for the day and for maybe other days in the future!

Tim led at the get-go, going straight up Valerie’s Patio (3a) making it look like a ladder while I managed to scare myself silly for a few minutes mid way (it’s that weird band right in the middle that spits people off across the cliff).

Right next door to Valerie’s Patio, Richard set up the Garden Party (6a) – a fantastic route that pretends to have a long move two thirds of the way up but, in fact, is not. The intermediate holds were more than enough with the right moves! Uha, I hear you say. Typical hindsight-on-a-top-rope comment.

To the left of these there were some routes with interesting sections (particularly the tops) and to be quite frank, did not feel like 4s and 5s. But what do I know!

What I do know is that Richard’s clip stick got a lot of use by everyone as no one trusted the starts (for good reason) but this meant plenty of slightly safer climbing.

Oli led the Wave Warrior (4c), Jasper (4c) and Ben (5a), as did Alistair and Katherine (not sure which ones). Nick, Damien, and Paolo (and others!) also climbed Sidewinder (6a), Dreamscape Direct (6b), and Dreamscape (6a). 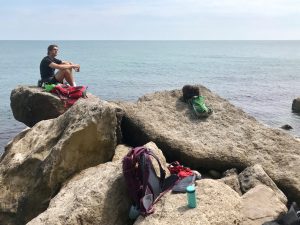 There was a little bit of queuing but we all had something to do to fill in the time: chatting about climbing (the normal situation), nothing (a pretty good situation), eating (an even better situation), or belaying (the active resting situation). 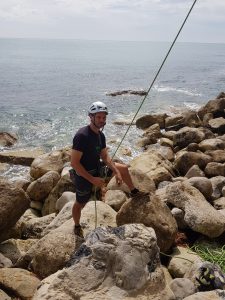 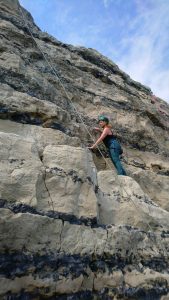 Harry eventually joined us for the day with the family dog for a bit of climbing R&R, turning up in the same outfit as Paolo. We recon they coordinated this but they denied such outrageous fashion choices. Hmm, we’ll let you guys be the judge of that!

Satish and David decided that they wanted to try out the Pregnant Pause Area, so they went and gave the area’s namesake a go. Unfortunately or fortunately, someone will have found themselves a new quickdraw!

All in all, a fantastic weekend was had all around.

I don’t know if we’ve managed to convince Joe that sport climbing is just as rad as trad, but there was plenty of climbing, lots of laughs, and much cheering. For me, the best part was watching the newbies grow in confidence and working hard (including working through anxiety and a fear of falling) to reach their goals. Climbing is far more mental than we’d all like to admit.

It was a pleasure – see you at the next meet!