A sense of unease shakes me from a vague dream into the present. I look at my phone, it’s 2:58 am. Someone’s moving downstairs. Lights are being switched on. There must be a reason for this nonsensical start to Saturday…then, like tea brewing, the plan for the day gradually infuses through my brain. It’s Joe moving downstairs. Jess and Katherine are waking up too. We’ve got to pick Chris up from Reading and drive to Ilfracombe. We’re taking the ferry to Lundy…

Excitement and adrenalin formed our first breakfast that morning. Driving away from Farnborough at half three I thought of Damien, Anna and Stef – they’d already been on the road for two and a half hours! We picked up Chris and somehow squeezed his bags into the boot. Next stop, Ilfracombe harbour. (Well, in truth, the next stop was a layby on the A361; but when you’ve gotta go, you’ve gotta go.)

The sun rose behind us as we scuttled west. An orange sky as we hit Somerset became rosy pink as we trundled into Devon. At Ilfracombe we found our arrival was timed perfectly to coincide with the opening of Adele’s café and the very welcome chance for a second (and, this time, cooked) breakfast. Then, having completed administrative formalities at the Lundy shore office, we were granted permission to board the M.S. Oldenberg and set off (past some ugly sculpture by Damien Hirst) into the wide blue yonder. 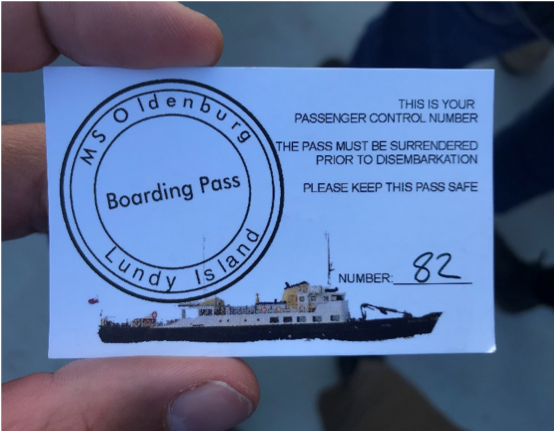 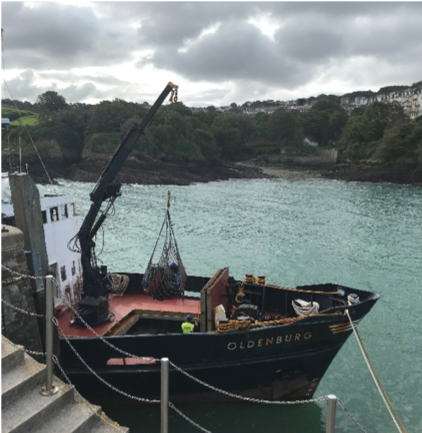 As well as being wide and blue, we found the yonder to be quite choppy that morning but, to my knowledge, no-one suffered too much and we contented ourselves with watching for dolphins and whales (both were harder to spot than Wales which, with its recent memories of the Gower meet, was clearly visible on the starboard bow). Lundy floated ever closer towards us and, a couple of hours later, we were in Landing Craft Bay disembarking before a small welcome party of seals. 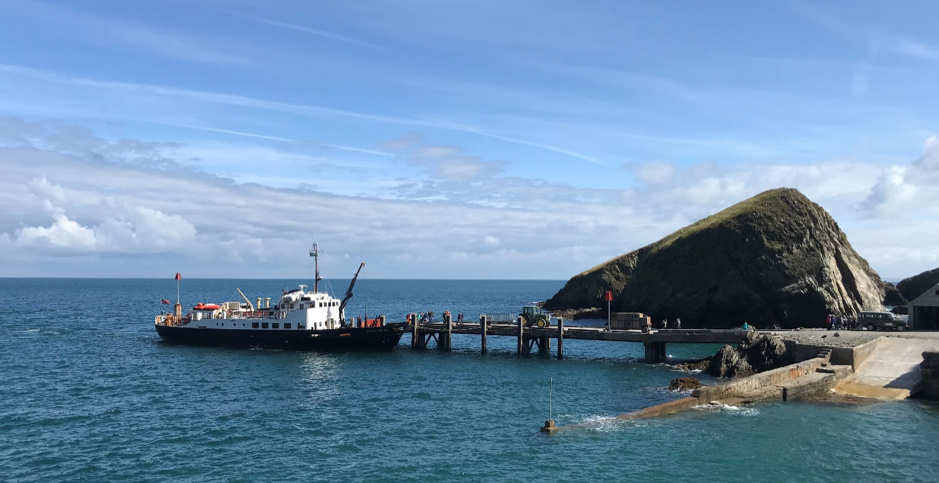 First impressions of Lundy? From the sea, it looked absurdly steep and rocky – perfect!

Strolling off the jetty we climbed (though, at this point, not literally) steeply up towards the “village” where a small number of buildings cater for one’s essential needs: spiritual (St Helen’s Church); commercial (the Lundy store); nutritional, social and medical (the Marisco Tavern). The Marisco Tavern also doubles up as an emergency shelter in the unlikely event that your tent is blown away…

Having lunched and made camp we finally got a chance to do some climbing. We set off for the friendly looking (and non-tidal) Beaufort buttress where Damien led Stuka (VS **) and Nick tried Force Eight (S*). Katherine, Stefanie, Anna and Charmian followed up beaming with smiles – our first ticks on Lundy and a great way to start the trip. Dinner followed at the Marisco Tavern where various clandestine conversations took place on the start time for a trip to the signature climb of the island: The Devil’s Slide (HS ***). 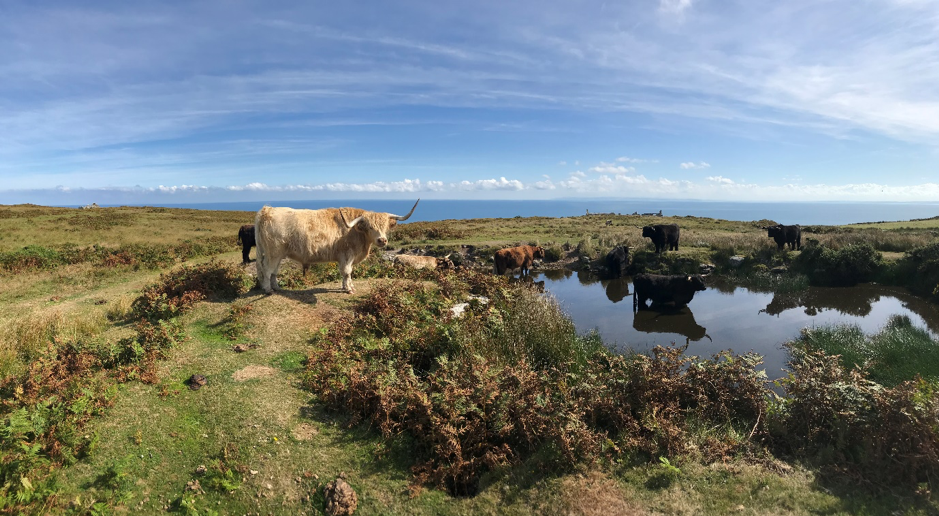 Because you need a low tide to access the start of the climb and this occurred at 8:30 am; and because the weather forecast suggested Sunday was the best weather of the trip; and (finally) because there were some other pesky climbers present on the island, a plan had formed whereby we all paired up and staggered our departure times from camp so as to all be guaranteed (we hoped!) a chance to climb this stunning route. Joe and Chris were the advance party, starting out just before sunrise; Nick and Stef were next; then Anna and Charmian; and finally Damien and Katherine.

Having been awake for about 19 hours (during which time we’d driven 200 miles, taken a 12 mile sea-voyage, and climbed a 30m route) I was barely conscious at the end of dinner. Collapsing in my tent, I left the waking-world abruptly, like a candle extinguished. Several hours later the rustle of canvas and “chirrrrp!” of a zip told me that Joe and Chris were departing. Operation “Dawn Wall” had begun…

Stef and Nick hiked northwards along the main island path to the Slide. Lundy is about three miles long and is divided crossways by Old Light wall (about quarter of the way along the island), the Halfway Wall (about halfway along the island), and the Three Quarter Wall (c’mon, you’ve surely worked it out by now!?). The sun was just rising and we disturbed some still slumbering sheep as we reached the three-quarter mark and struck out west for the Side. Navigation to the crag was aided by the sight of Joe and Chris still waiting at the top…apparently it wasn’t yet light enough to attempt the scramble down to the cliff-base. Stef and Nick sorted out their gear and then all four carefully descended the grassy slope to the base of the climb. Unfortunately “the climb” we’d descended to was not The Devil’s Slide so we trudged back up and tried another way: success. 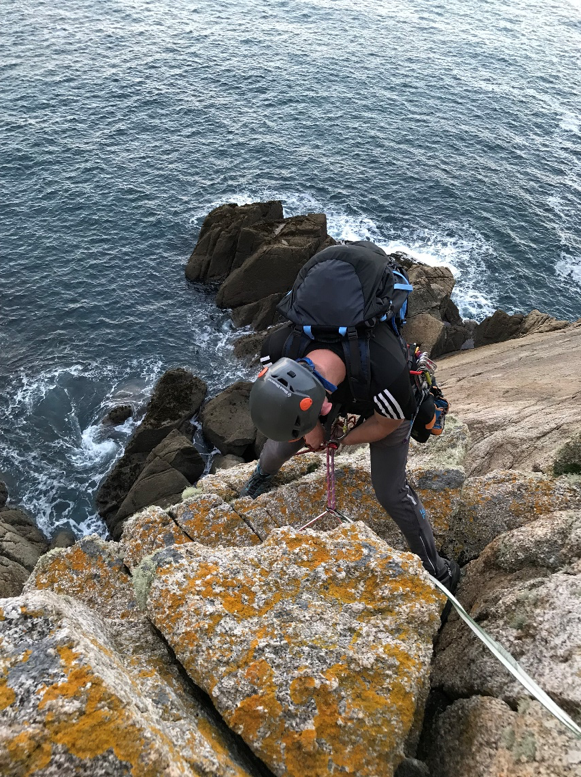 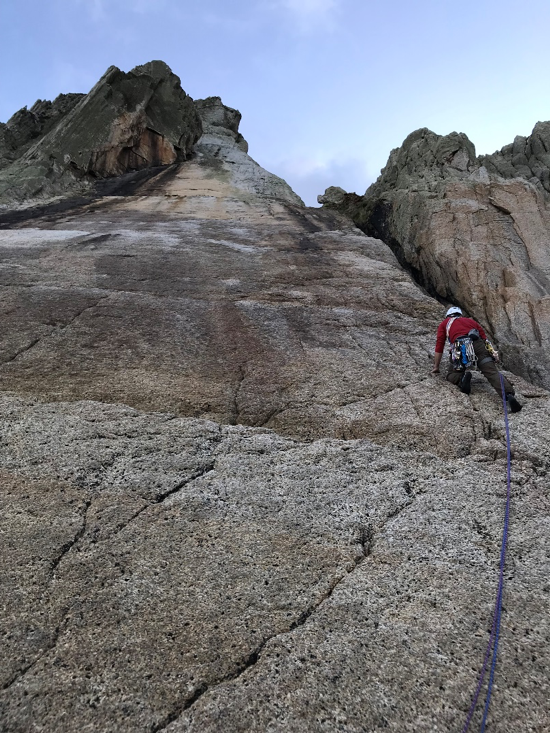 The 120m route starts like a walk, getting steeper metre by every metre, and is completed in five pitches, each one more satisfying than the previous. It culminates in a delicate traverse and steep escape pitch up the left hand side and provided us all with hours of excitement and entertainment that sunny Sunday morning. Classic in all senses. 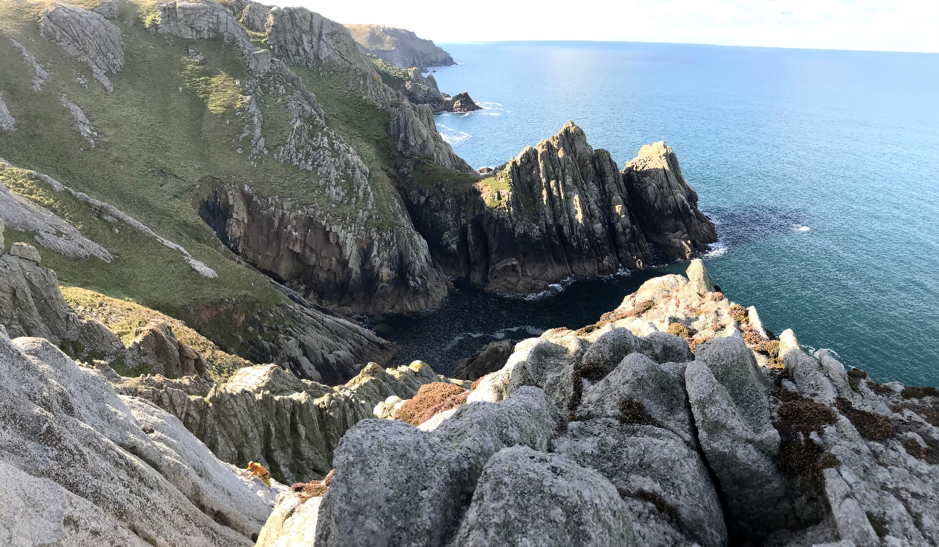 Joe nears the final traverse of the Slide

Walking back for a celebratory pub-lunch, we met Jess who was on a running lap of the island (all in all, around a pleasant 10km). She showed us a viewpoint of the Slide from which we could now see Anna and Charmian, and Katherine and Damien completing their ascents. 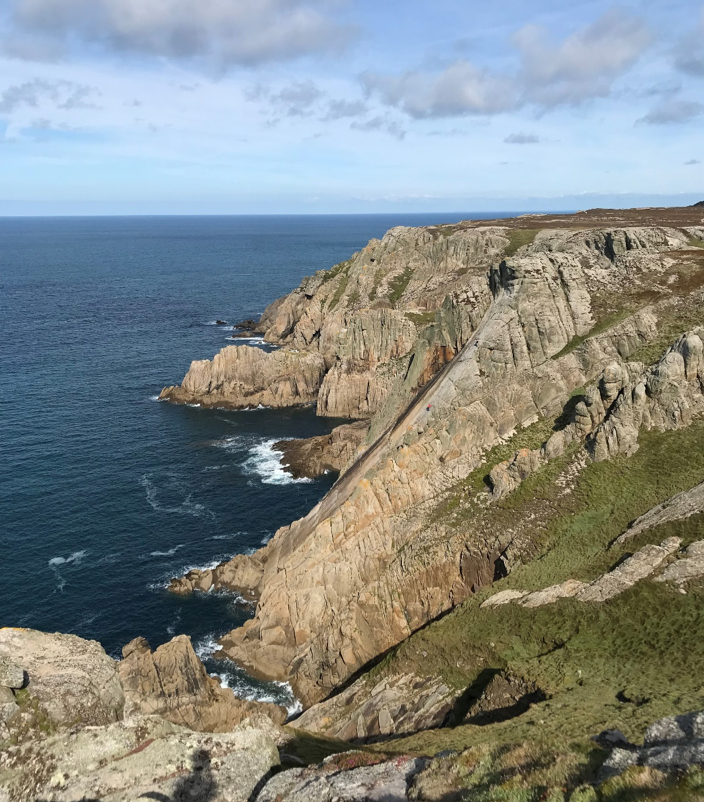 That afternoon we dragged tired limbs to Picnic Bay Cliff where we could all climb side by side. Anna and Stef found time to complete their second and third (respectively) ever trad lead climbs and Joe, Damien and Nick managed to turn a VS into a VDiff: a triumph for all. Back at the campsite we caught up with Sarah who had been swimming and watching seal pups playing on the rocks at the south of the island. Much merriment ensued at the Tavern, including quizzes and games of darts, before we turned in for the night. Straight above us the sky was a mass of stars and, to the south, the yellow glow of the Devon towns seemed very distant across the water. To the west, however, it looked like we could expect a change in weather…

At about 2 am the wind was bouncing my tent up and down like a jack-in-the-box and with each compression my feet pushed the inner and outer sheets together allowing a slurp of frigid water into my refuge. Next to me, things sounded even worse for Joe and Jess, who’s hitherto luxurious family tent was creaking and cracking very ominously. I lay still, wishing I could escape it all by drifting into a dream.

The morning came and, with the rain still teeming down, we made a bee-line for the Tavern and a cooked breakfast. Hot food and hot drinks made everything seem better and we planned our rainy day activities. Joe and Jess were taking on the famous Lundy letterbox challenge (solving clues to find locked boxes hidden all over the island); Anna, Nick and Stef were planning a walking tour; Katherine set off on a run and Damien… 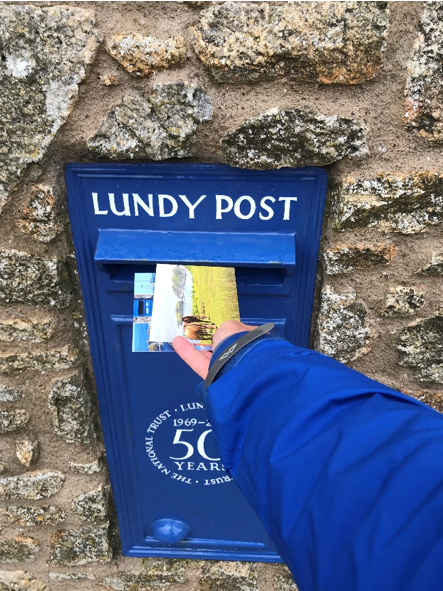 The Letterbox challenge is more challenging than this! 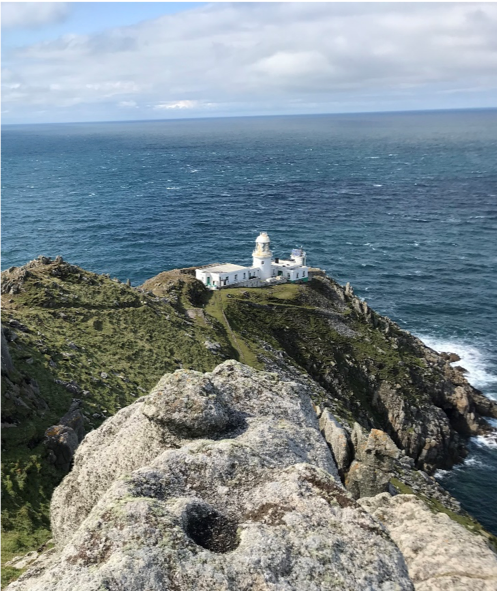 Well, Damien wanted to climb. “You wanna climb, Nick?” he inquired in pure AQI*. “It’s a bit wet isn’t it”, I returned, looking at the grey skies and sodden grass. “It’ll dry off” he predicted confidently – stroking the (dry) stone wall at the back of the campsite with a gleeful air. I was doubtful but, a few minutes afterwards in the Lundy stores, I spoke to a fellow-climber who was also making plans – “It will be fine later” he stated, “just drop a couple of grades and you’ll be ok”. On reflection, this was probably a fair comment – proven that afternoon when I “onsighted” the concrete staircase by the northern lighthouse. 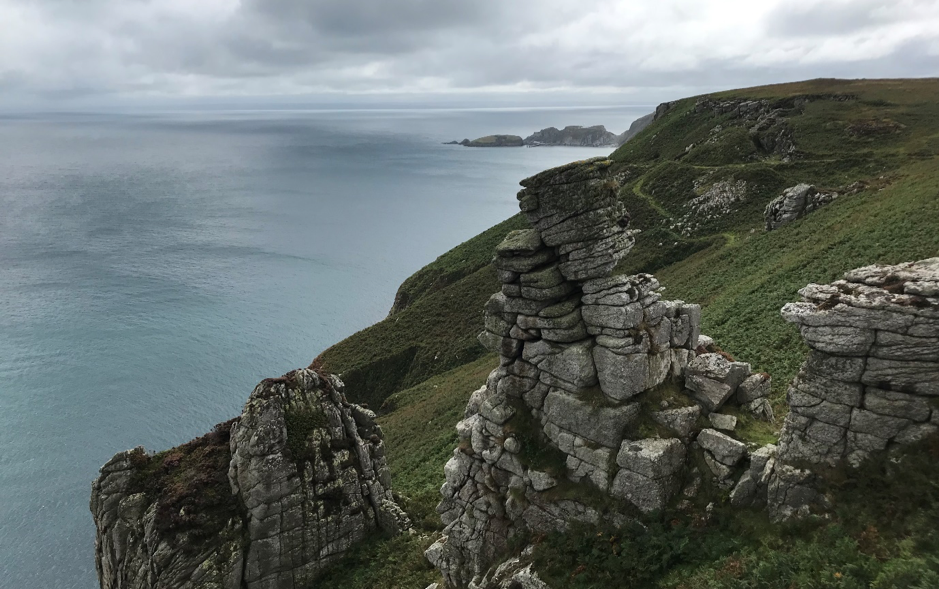 Fine walks around the island.

Fortunately, Charmian was also keen to climb so, together with Damien, they saw off some routes on the south of the island while the rest of us stayed sub-vertical. The walking did work up an appetite, though, so another evening in the tavern was enjoyed including tasting the local gin and the (far from local) stock of single malts on offer in the bar.

I slept quite well on Monday night actually – thanks for asking.

Tuesday dawned warm and bright. Sarah, Joe and Jess set off in search of seals and more letterboxes while the rest of us looked for the last climbs of the trip. Stef was hungry to lead so headed over to Seal Slab (D **) with Nick, who later had a run in with the law on the Constable (The Original Route (HS)) at the north of the island. 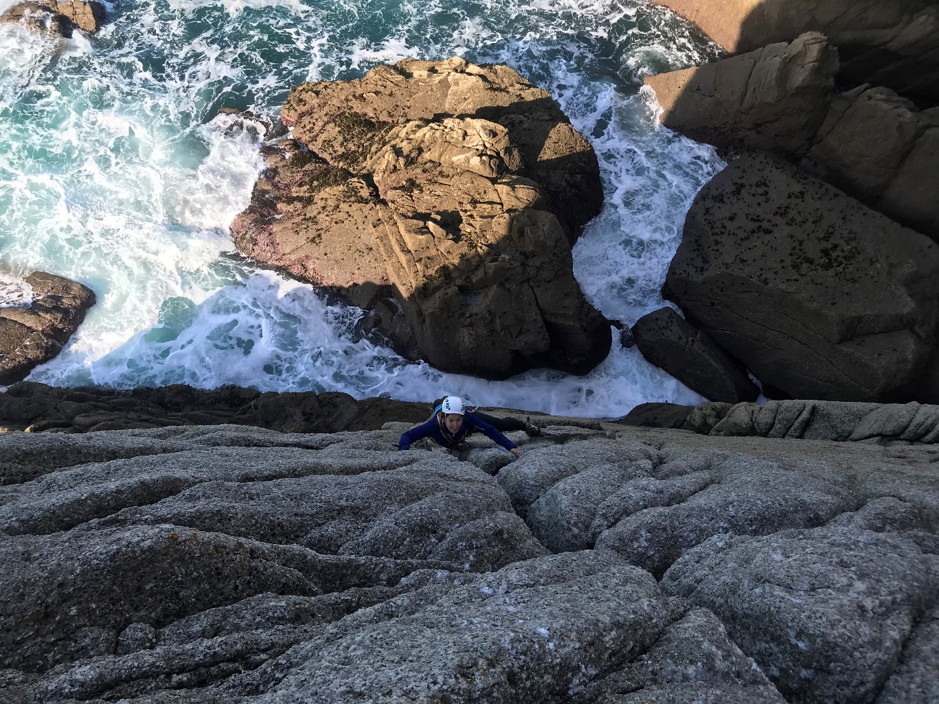 The seal of approval…Stef on seal slab

The others arrived at Flying Buttress with dreams of glory. Damien sparkled on the famous Diamond Solitaire (VS **); Charmian cantered up Horseman’s Route (HS *); and Chris had a “lark” on the genteel Alouette (S *). Ably seconded by Katherine and Anna, time was flying by on the buttress such that it soon became time to catch the boat back to the mainland. 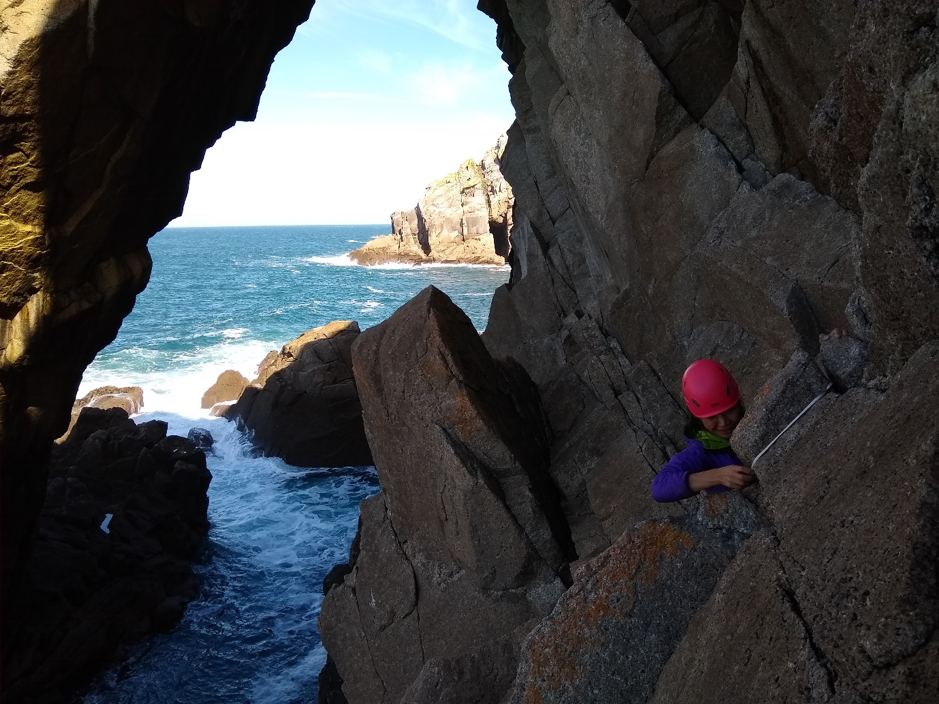 We all made it back to the jetty for the grand departure and, with the seals waving their flippers and singing their farewells, it was time to say goodbye to Lundy. 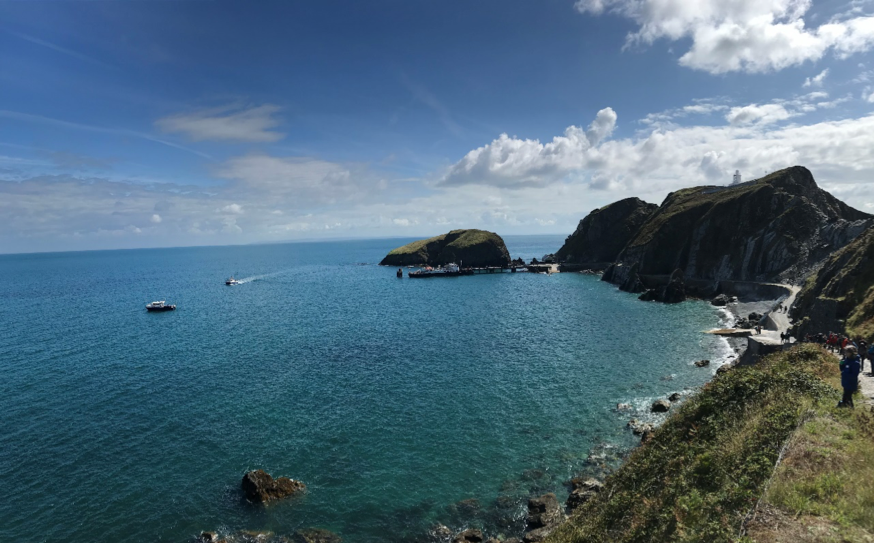 Thanks for a great meet, everyone. I’m sure we’ll hear the call of Lundy again soon.